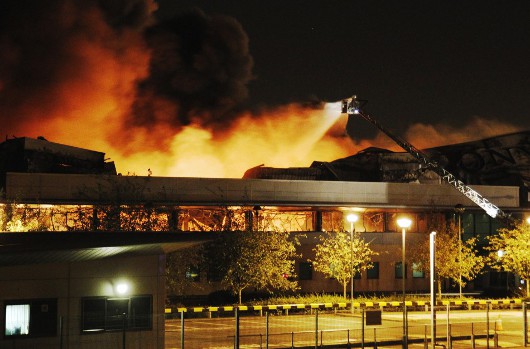 The Sony DADC warehouse in Enfield was destroyed by a fire lit during the riots that took place in London and other parts of the UK last weekend. More than 100 labels have been affected by the blaze, including Domino, Young Turks, Warp, Ninja Tune and XL. Warp today revealed that it has lost all of its UK stock in the incident.

Labels will be able to draw on the fund to “cover the interruption to their business and the cost of getting back onto their feet”, according to joint statements released by [PIAS] and AIM today. An initial fund of £250,000, established with money drawn from larger member labels, well wishers and AIM’s reserves, will be “made available as interest-free and security-free loans repayable within a year”.

The [PIAS] statement read: “Labels and artists affected by the destruction of the Sony DADC warehouse are faced with incredible pressures on their businesses in respect to the re-manufacture, re-supply and marketing required as a result of the fire.

“Whilst it is expected that insurance will cover the lost stock, the reality for many labels is that they will not be compensated or insured for an interruption of trade or the additional capital to reproduce the stock that they have lost and the promotion in which they have invested.

“[PIAS] have worked in conjunction with AIM to create a fund that companies and organisers of initiatives can contribute to. In this way, we have created a vehicle for enabling those involved to do so safe in the knowledge that such monies will be distributed fairly amongst the most needy labels with the sanction of both [PIAS] and AIM.”

The statement also carried a quote from Daniel Miller, founder of Mute Records, one of the most successful independent labels in UK history. He said: “Following the sad events surrounding the fire at the Sony DADC warehouse which houses [PIAS]’s physical distribution, it is crucial that the independent community stands together to ensure the ongoing business of the labels so badly affected. Mute supports any initiatives that will enable this to happen.”

Anyone wishing to contact [PIAS] and AIM in respect to the relief fund should email labelsupportfund@musicindie.com.