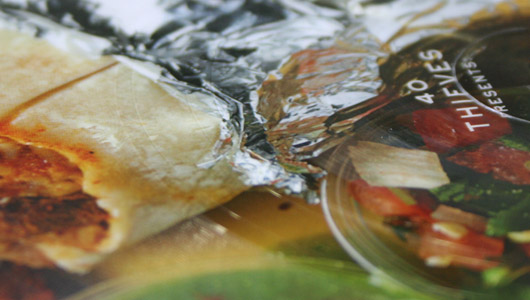 We’re suckers for records that come wrapped in artwork that amuses and amazes here at Juno Plus, and this week there were two that made is giggle in the shape of releases from the Mystery Meat and Public Release labels.

Rising Irish duo Bicep were responsible for the former, delivering four 80s leaning spotters delights on the less than prolific imprint which naturally arrived with the label’s amusingly framed granny shocking cover art in tact. Public Release enlisted San Frandisco crew 40 Thieves to serve up a triplet of edits and an original cut across the before and after Burrito picture disc you see above – anyone fancy Chipotle for lunch?

Lagging just behind in the amusement stakes was the dinky Luke Million seven on Future Classics with that italocised take on everyone’s favourite Austrian actor turned governor of Los Angeles…..

If you prefer your music to be a) serious and b) techno then may we suggest the new Sandwell District release from Bob Ostertag and Rrose which contains all the sonic hallmarks of the label’s sound – thick, muggy and brooding soundscapes – yet simultaneously pushes it in fascinating new directions.  Planet E overseer Carl Craig cast a suitably impressive shadow over the week too, enlisting Dubfire and Loco Dice to dust down two of his Paperclip People classics as well as dropping a suitably epic rework of Polish duo Catz N Dogz (do check the sultry Tanner Ross remix too!)

Two fine double LPs from Lerosa and Nebraska emerged grom the depths of house music in a week that also saw Juju & Jordash Unleash The Golem on Golf Channel and the welcome return of Chicago Damn and LHAS Inc. Man like Damn has been quiet since that astounding and long out of print Merc release and Let’s Submerge proves the mysterious producer has talent to burn. The first new LHAS Inc material in some three years from messrs Read and Dickinson proved just as potent, with the slower paced psychedelic, acid tinged oscillations of “Liquid Soul Drops” particularly memorable.

Earlier in the week those canny money music makers Radiohead teased us with the news that Shed and Actress have been inducted into the King Of Limbs Remix hall of fame and then in a blink of an eye the much anticipated 3rd edition of revisions from Lone, Pearson Sound and Four Tet arrived. It was perhaps the best twelve in the series to date with Lone’s remix standing out – his trademark sound is much more impressively reined in, concentrating on low bass frequencies for the most part and limiting his melodic use to one particularly devastating and ecstatic breakdown.  The much vaunted Pinch remix of Photek and a killer, industrial strength Blawan remix of Danish producer Beastie Respond ticked all the right the boxes in the bass music continuum.

On the digital front, London trio Dark Sky joined Modeselektor’s 50 Weapons stable, with four tracks of luscious, warm synths riding atop crisp 4/4 in a UK funky vein. The production values ride far above much of the UKF genre, however, owing more to Detroit electro than the sound palette of garage. Meanwhile the rise of Amanda and Britt Brown’s 100% Silk imprint continued apace with another floor focused two tracker from Daniel Martin-McCormick aka Ital. Sitting somewhere between the neck-snapping electro grooves of Dexter (think early Clone) and the chiming, bleep-heavy electronica of Warp’s original Artificial Intelligence series, it’s like a glistening, soft-focus take on dancefloor electro with a few clattering noises thrown in. Very nice, in other words.

Elsewhere, the excellent Machinedrum album entered the digital domain (check out our in depth review of that one here), while Peacefrog dug up some classic KDJ gold for the digital generation and Skream’s EP for NonPlus served as a nice reminder of how versatile Oliver Jones really is.