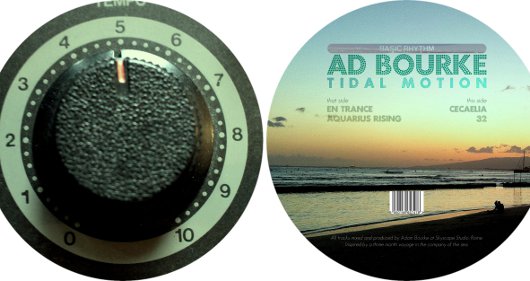 Space Dimension Controller’s move into the world of record label ownership will commence with a four track EP from Italian future boogie producer Ad Bourke, due in the coming months.

Bourke has been quiet since releasing the eight track Mirage EP for the ace London imprint Citinite last year and the day glo, gaudy beat heavy sound that ran through that release will possibly inform how the debut twelve on Basic Rhythm will unfold.

Entitled Tidal Motion, the EP was apparently inspired by “a three month voyage in the company of the sea”. It contains four tracks, namely “En Trance”, “Aquarius Rising”, “Cecaelia” and “32”. Each A-Side of a Basic Rhythm 12″ will contain the same art (above left), while the B-Side will change with every release.

Having just been mastered, there’s no concrete release date as yet though the outer galactic explorer himself advises us to expect the EP to drop late summer or early autumn.