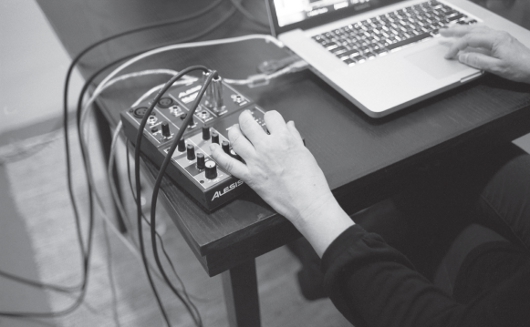 It’s long been established that RVNG Intl is a label that positively encourages the grander schemes when it comes to releasing music and the latest edition in their FRKWYS series is yet another example of this.

The sixth edition features four improvised tracks recorded off the cuff by iconic No Wave band DNA member Ikue Mori and rising star Julianna Barwick last October as part of a month long installation by the label at the White Columns gallery. The non profit art space has a strong heritage for supporting experimental music which dates all the way back to the Thurston Moore curated Noise Fest in 1981.

With the avant garde nature of the White Gallery in mind, the RVNG decision makers deemed it the perfect venue to host a FRKWYS collaboration. Placing Mori and Barwick in separate areas of a custom made particle-board cubicle in the centre of the Project Space, the two improvised performances that took place on October 29, 2010 were documented by a series of web cams and further manipulated by a visual artist. More intriguingly, these compositions were cut to vinyl at the gallery via a portable lathe. To get an idea of what to expect you can watch the below video which shows “Dream Sequence” unfolding and recorded.

The duo met again several weeks later at the gallery to record the tracks that make up the remainder of the FRKWYS release – this time however there was no audience or elaborate set up to document the performance. When discussing the project with us, RVNG Intl’s perma busy Matt Werth made an interesting point regarding the juxtaposition in sound between the tracks created in the initial performance and the latter. Careful listening reveals a palpable sense of tension throughout “Dream Sequence” and “Stalactite Castle” whilst there is a serenity that pervades “Rain and Shine at the Lotus Pond” and “Rejoinder”.

This being a RVNG Intl release you can expect the care and preparation that went into the music to be replicated visually, with the 12 ” edition of the release packaged in thick black jackets with a two-color adhesive wrap. In addition, regular cohorts Will Work For Good were commissioned to design a 24 page black and white booklet from photography of the two events taken by Aubrey Mayer and Jody Rogac, which will be included in the LP edition of the release.