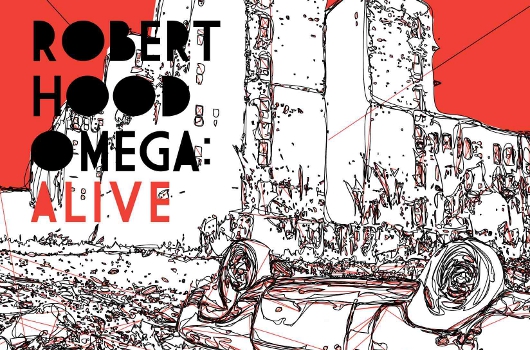 Robert Hood will revisit the post apocalyptic techno themes first explored on last year’s triumpant album Omega with the release of Omega: Alive, a new album that will work as an accompaniment to the Detroit producer’s forthcoming live show.

Omega: Alive takes the raw elements of tracks from last year’s album along with new and old material and reworks them into a tense and pulsating twelve track set which will form the basis of a thumping live show set to take place internationally later this month. It’s probably best left to the great man himself to describe the motivation behind the new live show and album:

“When I began put together ideas for the Omega Live Show I wanted to bring together elements that would of course, reflect the movie, Omega Man. I thought why not include a few past recordings, such as “Unix”, “Side Effect”, and “Minus” but with a post apocalyptic sound.  The idea was to simply stay true to my roots and to represent the Sci-Fi essence of the movie’s theme. I added some unfamiliar elements such as “Bells At Dusk” and “Minimal Minimal”, as well as James Ruskin’s re-interpretation of “Alpha”.”

The accompanying Omega: Alive tour commences in Hong Kong later this week before taking in several Chinese and Australian dates throughout May and we can expect European dates to be added in the near future. Indeed, M Plant will be holding a launch party for the album in Barcelona during Sonar Festival with the likes of Radioactive Man, Billy Nasty and Lee J Malcolm joining Hood at Nitsa on June 16.

M Plant will release Omega: Alive by Robert Hood on both CD and digital formats on June 20th.

Further European tour dates to be added for June & July