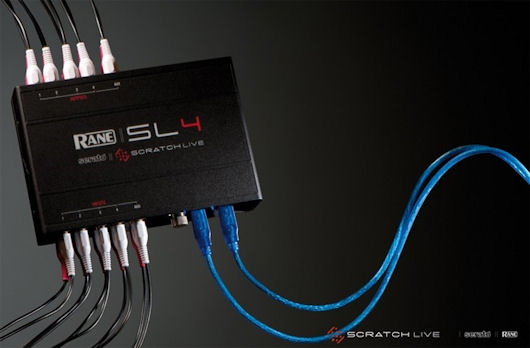 Earlier this year Serato fans were delighted by the news of the forthcoming SL4 unit which boasts the most significant interface overhaul since the software hit the shelves back in mid 2004.

Since then the vast majority of the advancements have been behind the scenes, focusing on upgraded converters or dynamic range.  With this update we’re given the freedom to connect four analogue stereo input devices (such as turntables or CD decks) for simultaneous use within Scratch Live, with an additional aux input to further the possibilities. Other key features include the addition of a second high-speed USB 2 port – which will go a long way towards eliminating those stressful DJ changeovers – plus a handy 96/48 kHz sample rate selector switch.

The box itself doesn’t differ hugely in appearance from the SL3, incorporating the same galvanic isolation as its predecessor. The exact dimensions are 7.25” x 5” x 1.7” with a 6lb weight and the construction feeling reassuringly like gun-metal. The stereo in/outs are all gold plated and are mounted sufficiently to withstand the knocks and bumps that they will doubtlessly come into contact with on the road. You’ll easily get four ground cables round the ample turntable earth lock, with the only seemingly out of place component being the phono/CD switches, which look more like something from a Tandy DIY transistor radio kit than a high spec professional DJing solution.

Setting up was no stress at all – we decided to go for the four Technics SL 1210 configuration, due to the fact that if there were to be any short-comings with the SL4 rig then this set-up will undoubtedly expose it. Shipping with Live 2.2, the first job is always to set the scopes, ensuring that your designated audio device will track the incoming signal. With that said and done you’re free to configure the player section as you wish, choosing from the five different display modes.  For those of you unfamiliar with the software, you’ve got Library Mode which gives the best possible view of your sound arsenal by minimizing the virtual decks. Then there’s the two classic modes – vertical and horizontal – which need little introduction. Two Deck Stack Mode also does what it says on the tin whilst maximizing the waveform view, and you can toggle between the four decks by means of the player drop down menus. Four Deck Stack Mode shows all decks and resembles some kind of hospital heart monitoring GUI with multiple waves stacked upon each other, making it easy to keep all four tracks locked in the mix by lining up the waveform peaks.

Once you’ve got this set up you’ll probably want to play some music, so it’s worth noting that the supported file types are fixed and variable bit rate denominations of .mp3, Ogg Vorbis, .AAC, .AIFF, .ALAC, .WAV, and Serato’s own whitelable.net audio files which are pre-analysed, tagged and labeled .mp3’s for use exclusively with Live, available free to license holders through whitelabel.net.  You can easily sort your music into crates, subcrates and smart crates (which update their contents by using keywords which are matched with selected tags of your music library tracks).  There’s also a nifty search-engine if all else fails and you can add or edit ID3 tags within the software.  To round it all off if you create a profile on Serato’s website you can enable the playlists plug-in and edit or share what you are up to in real time. The flexibility of the way that each of the players behave has long been one of Live’s strong points. ABS or Absolute Mode is the most commonly used and faithfully replicates the whole spinning with vinyl experience down to the very smallest detail.  Then there’s Relative Mode (Rel), which observes the forward and backward movement of the record, but won’t take into account the position within the record itself. There’s a host of digital transport functions that can be used within this mode. Internal Mode or INT eliminates the need for any control vinyl or CD.

“Reliability is the key to the SL 4’s stellar reputation; both the box and the software have proved that simplicity and functionality will be the key to this system’s ongoing success”

Operation in Four Deck  Stack Mode is very manageable although we’re not graced with any of the usual sync or keylock functions usually associated with this kind of digital DJing. One of the best things about this system is the included SP 6 sample player, which allows you to play up to six audio files on top of what ever you’ve got coming through the players when the SL 4 is connected.  You can load in full tracks or samples and determine the way they behave with the pitch, loop, cue, output select and volume functions triggering via MIDI as you go with a tidy little graphical track overview for reference. Connecting the SL4 also brings the DJ FX plug-in to life giving you 14 different effects types each with multiple presets and parameter modulation possibilities.  You can also sample from vinyl on the fly or record your DJ mix as a 24-bit 48khz .AIFF file.

Reliability is the key to the SL 4’s stellar reputation; both the box and the software have proved that simplicity and functionality will be the key to this system’s ongoing success.  For those of you that use Ableton, you can also download the Serato Bridge which enables synchronization and the remote control of Live 8.2 or above with the SL4’s interface. [Find out more at Juno]