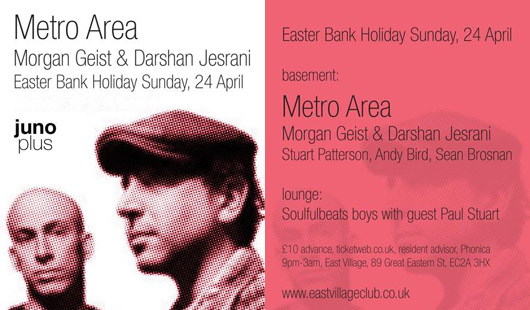 It’s a rarity these days to find both Morgan Geist and Darshan Jesrani manning the decks at the same time, so this promises to be a bit of a treat.

The duo released their eponymous debut album in 2002, an epic affair that touched on R&B, disco, boogie, house and techno. A new long player is on the way – were not sure exactly when, but we’ve been told it’ll have a “weird synth pop vibe”.

The event will take place this Sunday (April 24) in the basement at East Village. Full line-up and ticket details can be found below. There are a limited amount of advance tix still available which you can grab here.