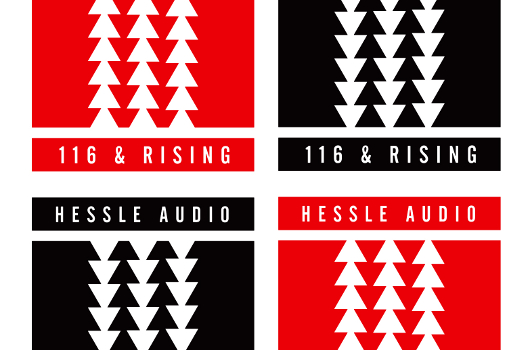 Released over double CD and triple vinyl album formats, 116 & Rising comes wrapped in design courtesy of Will Bankhead – responsible for the excellent Trilogy Tapes label and website – and is presented as a representation of the label’s rich quality of output to date as well as an auspicious look at what to expect from Hessle in the future.

The first CD is comprised entirely of new material from the label’s stalwarts such as Untold, Joe and Elgato along with some of the artists  that helped form the ethos behind Hessle Audio in DI and Addison Groove.  Naturally both Pangaea and Pearson Sound also contribute new material along with Punch Drunk boss Peverelist and newcomer Randomer.

Some of the label’s finest output to date fills the second CD with tracks from Untold, Blake, Blawan and some classic Ramadanman featured, The contrast in sound and style between the two sets is a good representation of the label’s progression from its loose dubstep origins to output broaching other styles and tempos – something perhaps hinted at in the title.

For more infromation head over to FACT who have an exclusive interview with Ben UFO discussing the formation of the project. The label will also be hosting a launch party for the album at Shoreditch venue XOYO ahead of release on Friday May 13.