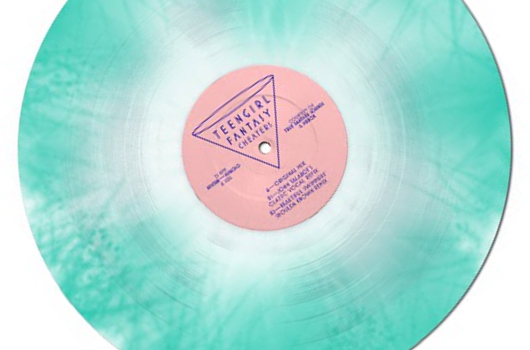 Set for release early next month, this is something we’ve been excited about ever since John Talabot revealed he was working with the Irish producer on a remix via Twitter last October. The original from Teengirl Fantasy of course featured highly on our Top Tracks Of 2010, as well as garnering equal acclaim elsewhere.

“Cheaters” seemingly captivated Hivern Disc as much as it did the Juno Plus team after compatriots Delorean returned from their US tour with glowing words for the track.

The centrepiece of the band’s debut album 7am – released via Merok and True Panther depending on what side of the Atlantic you call home – now gets the twelve inch vinyl release it fully deserves thanks to the Barcelona based label.

Arriving on the smart green marble finish vinyl you see above, the original version has the A Side to itself, whilst the B Side holds a collaborative remix from John Talabot and Mano Le Tough under the hard to decipher JTMT moniker as well a delightfully idiosyncratic freeform disco remix from Beautiful Swimmers – something fans of their label Future Times have become accustomed to expect.

The exact release date is still to be confirmed but we expect it soon!