Focusrite unveil Scarlett 18i6 and 8i6 audio interfaces 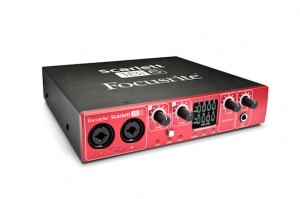 Focusrite bounce in to the spring season with the announcement of two powerful 24-bit/96kHz USB audio interfaces, due to hit the shelves in May.

The Scarlett 18i6 is geared for studio use, described by the manufacturer as “band ready”, offering a total of 18 inputs (including two high-gain instrument inputs) and six outputs each with its own dedicated socket.

The 8i6 model is slightly scaled down, with a cool 8 in/6 out configuration making it an ideal choice for DJs and home recording due to its two high-quality mic pre-amps (included in both models).

The Focusrite’s Xcite+ bundle is also included in both, featuring Ableton Live Lite, Novation’s Bass Station plus over 1GB of royalty-free samples.