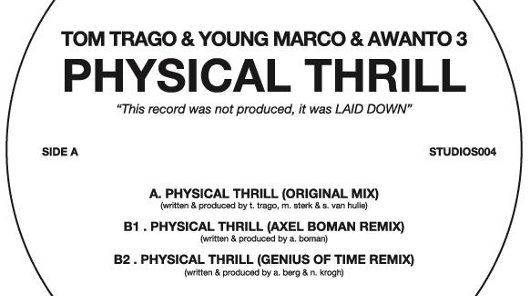 Three of Amsterdam’s brightest producers – Tom Trago, Young Marco and Awanto 3 – have collaborated on an upcoming 12″ release for Studio Soulrock, with Swedish starlets Axel Boman and Genius Of Time chipping in with remixes.

“Physical Thrill” was laid down in one incredibly productive evening, with the slo-mo, late night jack audible on the Soundcloud teaser below.

The first remix comes from the highly touted Axel Boman, who has already released on DJ Koze’s Pampa imprint and co-running the Studio Barnhus label. London residents can catch him at this weekend’s Taste Of Sonar event at the Roundhouse, with Juno Plus tipping the Swede’s combination of DJing talent and finely cultivated quiff will quickly make him a cult hero amongst the city’s clubbing fraternity.

“Physical Thrill” will be released via Studio Soulrock in May.