Pioneer have long had the professional CD deck market sewn up, and these days it seems that they are launching new products as quickly as their predecessors are going out of fashion.

So with literally hundreds of DJ controllers now available across the price and performance range it’s easy to question the motive for Pioneer to introduce two all in one DJ consoles – one optimised for Serrato Itch, the other for Traktor Pro – especially with the latter’s platform S4 unit dominating much of last years’ DJ equipment media. Is it a quick fix using their current stock of components or could these two monoliths of joy be the first advancements in the standardisation of club controllers? We’ve got the DDJ T-1 (that’s the Traktor one to you and me) on the Juno Plus testing slab and we’re going to find out.

Looking strangely like one of those high speed catamaran hydrofoil boats, the DDJ T-1 stands upon two removable triangular supports which act as a docking station for your laptop. They fit neatly underneath the controller, exposing the screen only as you won’t need to touch the keyboard or mouse. The casing does feel a bit light, following suit with most of the Pioneer (and a great many other manufacturers) range these days – in fact it’s only really Allen & Heath and Reloop that seem to be taking the durability of the outer shell as seriously as the intricacy of the circuitry.

“Weighing in at a cool yet noticeable 5kg, it’s definitely portable and you’ll see familiar features from Pioneer’s past and present range dotted around the control surface”

Reassuringly, however, the bottom is made of sheet metal which does ease any worries. With a length and width of 680 x 95.2mm and weighing in at a cool yet noticeable 5kg, it’s definitely portable and you’ll see familiar features from Pioneer’s past and present range dotted around the control surface. The players on either end have the illuminated jog wheels from the CDJ-400, a needle search ribbon similar to that of the CDJ-2000 (this looks better as it is split into five sections which can control other features), plus loop, reloop and hot cue module and effects control on each, with selection for three simultaneous effects. There’s also a single knob-controlled high and low pass filter plus deck select buttons.

Moving inwards, the four channel mixer looks well laid out, with 3-band EQ control per channel, assignable crossfader, effects sends, cue sync and master keys plus a very meaty push to make step encoder for loading and selecting tracks. There’s a further six buttons located along the top horizontal axis for record, load and favorites recall. The only slight issue here was the poor quality on the EQ knobs which were sharp to touch and a bit too stiff. 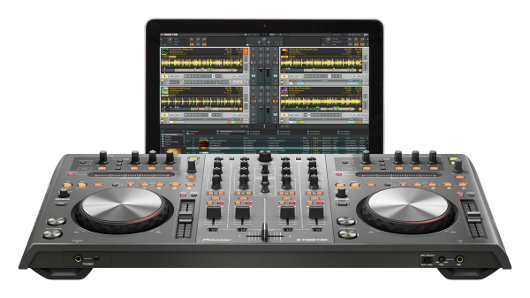 Looking at the connection hook-ups on the back panel, Pioneer have graced us with balanced 1/4 inch and unbalanced RCA stereo outputs. There is no separate booth output, and looking at the preferences no way to reroute either of the existing outputs. There’s an RCA aux input pair with mini volume knob, USB B connector and a Kensington security lock. On the front you’ve got the aux/mic input selector switch, RCA headphones and mic inputs plus an additional headphone minijack adaptor.

The DDJ T1 ships with Traktor DDJ T1 Pioneer addition software. This is basically Traktor Duo over four decks with certain features such as advanced/single FX mode, quantize, MIDI clock, broadcasting and some deck and browser detail not included. Having recently spoken to Native Instruments, we can however confirm that as from April DDJ T-1 customers will be able to upgrade to Traktor Pro 2 for €129 (about £110). With the latest edition of Traktor Pro and without the need to install any drivers on our Mac we’re up and running in under 10 minutes, from sealed box to everything working in true ‘plug and play’ fashion. Using the controller in four deck internal mode really is very easy due to the fact that the controller perfectly mirrors what you’re seeing on the screen. Anyone familiar with Traktor will be able to use the DDJ-T1 immediately and those not familiar with the software will find the console layout so accessible that it’s doubtful there will be any issues. Selecting effects and parameters has never been easier due to the select/back key which we found to be super responsive.

The loop control section is very slick with movable beat grid, adjustable hot cue type, loop in out/adjust, and eight hot cue triggers with back and forward navigation, making this part of the player as good as the S4. The weighted jog wheels are nice and sturdy and can be operated in the standard scratch and pitch modes, although there is no adjustable sensitivity as there is in the flagship CDJs. The file browsing system is snappy and you’ll not miss interacting with your mouse and keyboard one bit. One of our only gripes is the positioning of the ‘needle search’ ribbon which, although faultlessly useful for searching, cueing up tracks and performing needle drops, does tend to get in the way when jamming the effects. Yes you can turn it off and re-assign any of the five split segments to control other parts of the software (through the preferences not on the fly). The DDJ-T1 isn’t going to revolutionize the way people play music – that’s not its intention – we’ll need to wait for the software companies to add some new features first. However if you want an easy-to-use DJ system that will perform almost flawlessly, then you’ll not be disappointed. Check out the video below in which Christian Varela injects some Spanish flair into the DDJ- T1.