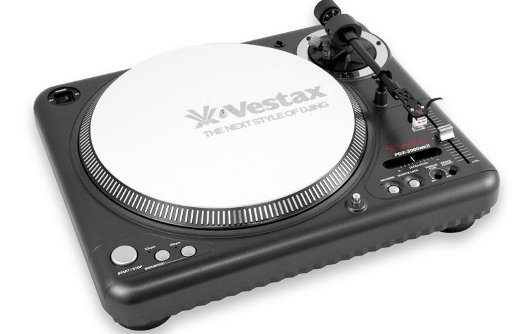 Shortly after the demise of the legendary Technics SL series turntable was confirmed last year, Vestax launched its PDX-3000 MK2. Vestax have been manufacturing professional DJ turntables since the late nineties, and in that time have become a particular favourite of hip-hop turntablists such as DJ Qbert.

This is partly due to their straight tone-arm models which claim to provide greater tracking, paired with their unique tonearm suspension system for increased skip resistance.  With a list of features and specifications that looks like the sales brochure for a submarine, we decided to take a closer look at the pupil which, like it or not, is soon to exceed its master.

Some key improvements have been made to the original model; firstly there’s an upgraded motor with a torque (also called moment of force) of up to 4.7CN/cm, which will reach a constant speed from stationary in half a second.  Second, it has a 32bit CPU servo regulator fitted which maintains a constant optimum speed regardless of how much punishment the operator puts on the platter, pitch control or any of the other controls.  The platter has been lowered and will actually communicate with the motor via another servo dependant on the amount of force applied. The sides of the platter have been redesigned to give the DJ smoother control when executing hands-on adjustments to the mix. Finally, the air suspension insulators (or feet to you and me) have had an overhaul and the part rubber, part air filled chambers are now fine-tuned to absorb shock as well as absorb low frequency feedback.

“With a list of features and specifications that looks like the sales brochure for a submarine, we decided to take a closer look at the pupil which, like it or not, is soon to exceed its master”

The deck itself measures in at 454(W)×162(H)×365(D)mm, weighing 9.5kg and on first inspection the ultra strong high pressure formed ABS plastic case feels like metal.  This construction has apparently been engineered to fight the eternal war against feedback whilst maintaining a high resistance to shock impact.  The top panel consists of Vestax’s patented ASTS (anti-skipping tone-arm system) which is straight, made from an undisclosed matt-finished black metal and is said to ensure high sound quality and stable playback by reducing the inner and outer force of the needle, thus suppressing horizontal vibrations.  You can adjust its height by means of a fixed screw and its weight can be calibrated from feather light to the point that the cartridge casing will actually drag along the record.  It should also be noted at this point that the tone-arm moves in both directions, meaning that it will either play its own platter or that of another turntable placed parallel to the right.

Moving downwards you’ll find the main function controls which consist of the +/- 10 per cent pitch control slider plus the horizontally positioned  +/- 50 per cent ultra pitch mini slider.  Located below are the raised rotary brake control and torque simulation knobs alongside the quartz lock button and reverse button.  Moving left along the bottom axis of the case there’s a hub for attaching the included stylus illumination jack and to the far left are the transport controls which are a large start/stop and two smaller 33 and 45 rpm buttons which when depressed together enable midi mode, allowing the turntable’s platter to be controlled by an external midi source.  The power switch is neatly tucked away underneath the 7” EP adapter.  At the back of the deck you’ve got RCA’s taking care of the audio output.  The deck comes with a standard phono cable but at least now, unlike with the 1210, you can pimp your ride with whichever level of quality suits your needs. The ground nut feels sturdy enough, there’s a mini jack remote socket that will enable you to start/stop the platter with a third party device such as a foot switch.  Finally there’s A 5 PIN DIN female midi in port and a fixed power output cable.

With all the tech talk out of the way, we figured that for those of you unfamiliar with Vestax’ range the most beneficial way to road test the PDX 3000 MK2 was alongside the better known 1210.  After a few seconds experimenting with the torque simulation knob you can set up your PDX’s platter/motor to handle almost exactly like a 1210 – If you’ve never used a 1210 or require a different performance to suit your mixing or scratching technique then just jam until you decide what works best for you.  The straight tone-arm has long been a talking point and isn’t to every one’s taste so it may take newbies a while to get used.  You can quickly adjust the counter-weight to suit the job but beware not to exert too much force onto the cartridge otherwise you may damage your records.  At least the days of attaching a one pence piece to the head shell with blu-tack are well and truly gone! The main pitch control handles very much like that of a 1210 and the first mix that we attempted locked effortlessly in time almost immediately.

We instinctively thought the ultra pitch function was going to be used to make fine adjustments to the pitch, thus correcting any discrepancies to the mix without the aid of physical contact with the platter. It came as a bit of a shock when it turned our Clone Basement Series 12” into a happy hardcore workout with its over generous +/- 50 per cent variation which we are sure will be beneficial to some.  The Quartz lock works exactly as it should and the reverse function is a nice touch, although when beat matching takes a fair amount of skill to reverse and push the resulted audio seamlessly back into time.  The break adjust enables snappy, instantaneous or long and drawn out platter stops.  MIDI mode was the only slight disappointment of the test session, and with little documentation in the manual we worked out that with a MIDI keyboard it is possible to control the speed of the platter over three octaves.  This only altered the pitch of the turntable which yielded some interesting yet not altogether useable results (adding a sequencer to the equation will probably allow more).  MIDI in, out and through, with all of the deck’s functions able to send and receive data would really have pushed the capabilities of the PDX to new uncharted levels.  Aside from this minor gripe and the absence of a dust cover we’re confident that this product and it’s future offspring will ensure that the vinyl DJ will remain more than adequately catered for into the future.