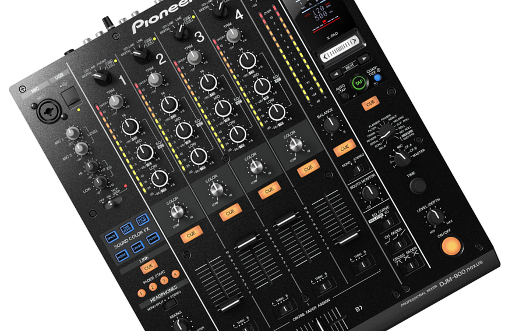 It’s time for the DJM 800 to step aside and make way for the massively updated new addition to Pioneer’s range of professional DJ mixers, The DJM 900 Nexus.

The Nexus features a super crisp 96kHz/24-bit internal soundcard and is fully midi assignable with the most exciting new features being the addition of the the “X-Pad”, a touch-sensitive strip that simultaneously engages the “Beat Effects” making sure that key characteristics such as tails and delay feedbacks are completely quantised in time allowing the user to concentrate on the artistic manipulation of performance enhancing reverb filters, roll time and LFO frequencies.

Another update is the addition of a 2nd LFO meaning that LFO1 is now controlled buy the beat buttons whilst LFO 2 expresses further wobble factor using the X-Pad. Additional new effects include a high end reverb with a studio quality two minute tail with adjustable room size and a pitch echo called “Spiral” which features feedback looping.

Slip Roll which was already premiered on the DJM 2000 last year is included on the DJM900 and there’s also a side chaining pitching sampler called “Melodic”. Midi LFO allows the seamless integration of software or external effects units into your system whilst the unit is fully Traktor compatible eliminating the need for a Native Instruments Audio Interface and all the extra connections.

The DJM 900 is part of the Pro DJ Link family meaning communication with other Pioneer products via a LAN connection further increasing performance. Even the fader’s have had a makeover.

Check out the Official Introduction to the Pioneer DJM-900 Nexus video with James Zabiela & Nic Fanciulli below.