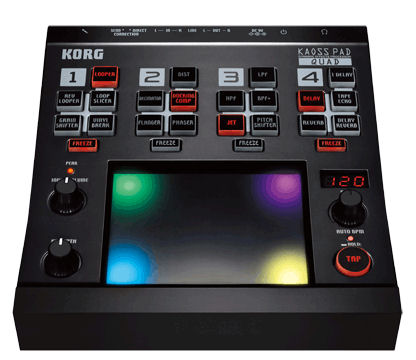 Korg have unveiled the new Kaoss Pad Quad, an illuminated touchpad control which allows DJs, producers, vocalists and sound architecture experimentalists the chance to manipulate up to four effects simultaneously.

Coming twelve years after the first-generation Kaoss Pad, these effects can be synced to the beat of your music freely transforming your song in real time. Any audio source can be processed including raw vocals via the mic input.

As you tap, slide, or move your finger across the X-Y touchpad, the effect parameters will change, producing dramatic real time changes in the sound.

One big change to the touchpad is the addition of LED’s that light up in an intense variety of colors. The illumination changes depending on the state of the effects, the BPM setting, and on your movements while performing. Each of the four effect modules (Loop, Modulation, Filter, and Delay/Reverb) contain five options for a total of 1,295 combinations. There’s also a multifunctional freeze button that memorizes the position at which you’re touching the pad, causing that effect to be held even after you release your finger.

A release date has not been set – watch this space.