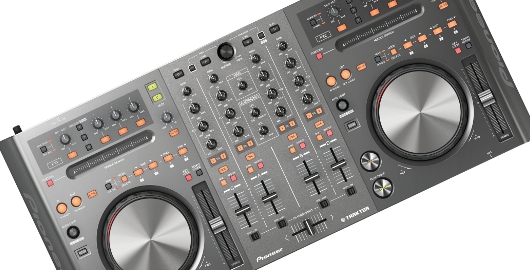 This morning Pioneer further opened up the possibilites for digital DJing with the launch of  the DDJ- S1 and T1 controllers that maximise the potential of Serato &Traktor respectively. The resident tech experts at Juno Plus have gone over the specifications for both bits of kit and can offer the following insight for those contemplating purchase

The DDJ-T1 controller is mooted for an earlier release and comes with special edition Traktor Pioneer DDJ-T1 edition software loaded with all the most popular features of Traktor, which are not available in the standard Traktor LE package. We’re talking four channel deck control, six effects, loop editing, quantising and recording as well as a channel fader start function that allows DJs to create cue starts through the controller. The controllers layout is designed to mimic Traktor DJ software for ease of use and the fact all buttons are pre assigned to the software functions along with USB connectivity makes for true plug in and play capabilities.

Due for release in mid-February 2011, the DDJ-T1 will drop with a suggested retail price of €1099/£899 including VAT, offering an affordable solution for bedroom or mobile DJs.

Meanwhile, the DDJ-S1 is unique amongst controllers for offering various inputs and outputs including a balanced XLR input/output (1 of each) for connection direct to professional PA equipment. In addition, within that familiar Pioneer layout (it looks like two Pioneer CDJs bolted to a mixer) there’s tight integration with Serato ITCH software, allowing DJs to play music files direct from their laptop without the need to ever touch the keyboard. The effect control area allows DJs to add Serato ITCH DJ FX to their mixes, whilst the master and channel level meters are located centrally on the unit, allowing DJs to monitor the level of the master and each channel while adjusting the volume. Add to this the simple Plug and Play connection, amazing software features and superior hardware control, and the Pioneer DDJ-S1 is a major force to be reckoned with.