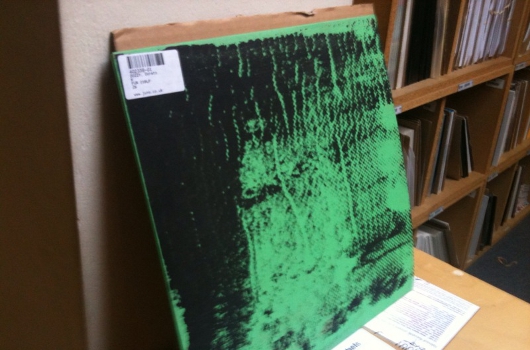 It’s all been a bit Techno Techno Techno this week with an unusually rich vein of throbbing machine funk greatness to wrap our senses around.

Donato Dozzy delivered a bewitching album of richly textured, melodic techno which came housed in a lovingly produced green and black screen printed cover, whilst amidst the deluge of quality techno twelve inches Marcel Fengler took the first steps towards the recognition enjoyed by fellow Berghain residents Klock and Dettmann. His Ostgun Ton release was caught somewhere between human spontaneity and machine-led precision whilst he also contributed a typically abrasive remix of Skudge.  Sandwell District fans will already have snapped up the two Reality Or Nothing releases that surfaced this week and a special mention goes out to the darkly haunting 12″ from Svreca which comes with cavernous remake courtesy of Regis.

It was a big week of releases in the world surrounding dubstep too with Roska and Untold’s Numbers EP complemented by the vinyl release of the ever so classy Velour EP on Night Slugs, Ramadanman refixing Brit crooner Jamie Woon”s Burial produced “Night Air” and Eglo muse Fatima added some glorious butter soul to “Just Vybe”, DVA’s return on Hyperdub. Will Saul teamed up with Mike Monday for the latest AUS release which saw Scuba deliver a remix that tread the line between house, dubstep and techno in typical Paul Rose fashion. Ten Thousand Yen finally released the superlative “Footsteppin'” from Bristol’s Julio Bashmore and get extra points for the egg blue scren printed ten inch it comes housed in.  Last but by no means least, R & S dropped the latest relason to heap oodles of praise on the delicate shoulders of James Blake with the release of his much anticipated Klavierwerke EP.

Anton Zap’s Ethereal Sound imprint continues to make an indelible mark on the collective impressions of Juno Plus, with the fifth release from the mysterious Pjotr containing a truly stunning slice of electronic music in the A Side “Sojush” – do investigate! Millions of Moments also provided us with plenty to enthuse about with an extended reissue of Raza’s “Gonna Make You Work” on transparent orange vinyl which dropped some heavyweight Chicago and Detroit leaners. New releases on Hot Creations from Robert James and Burnski and a new Nico Jaar ten inch for Gadi’s Double Standards imprint meant it’s smiles all round for the deep house crowd.

Permanent Vacation sneaked in the second volume of Reckless With Your Love remixes, coming replete with two remixes from Chicago ledge DJ Sneak as well as a neat piano refix from the Perm Vac inhouse production crew. Elsewhere Max Essa tried to deliver the ultimate contemporary Balearic anthem with the sprawling 20 minute “Panorama Suite” which is complemented by a neat Mark Seven boogie refix of “Uptown Vibration” on the flip. Duff Disco got some heavyweight remix treatment from Eddie C on his breakthrough 12″ for Composite whilst Social Disco Club and Mark E added some buyability sheen to Trujillo’s debut on Spanish label Apersonal.

In the digital realm of deep house, remixes of Emmanuel Jal from Henrik Schwarz and Olof Dreijer of The Knife add an extra layer of impressiveness to Innervision’s already worthy cause of highlighting the forthcoming Sudanese referendum and Ethyl & Flori headlined a superlative EP of deep house goodness on the new release from Mancunian label Development Music.

Traks Boys opened up the  Far East branch of the Internasjonal worldwide network with the psychedelic delight that is “Starburst” and also gleaned some raw house remix goodness out of the always impressive TBD. Richard Norris dropped a timely reminder of how good his album as The Time & Space Machine is with an extended rework of the title track “Set Phaser To Stun” which was complemented by remixes from Bottin and East London duo Sioux City Boys Club. Speaking of the Venetian discoid genius, Nang digged into the Bottin archives to release the first fruits of  an old collaboration with Swiss singer Joy Frempong. And it’s a Duran Duran cover to boot!

To sign off it’s only fair to mention the Commix Remix album which has just been confirmed as the new definition of ‘heavyweight’ by Oxford University Press, thanks to remixes from Kassem Mosse, Dettmann, A Made Up Sound, Pangaea, Underground Resisitance and Burial.