Discodeine team up with Jarvis Cocker for DFA 12″ 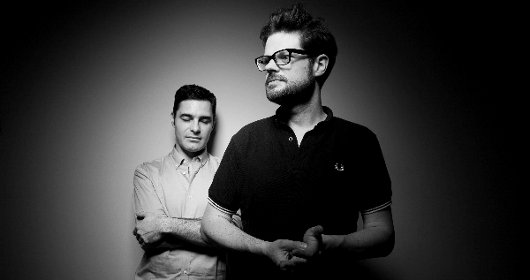 Slick French duo Discodeine (aka Pilooski and Pentile) have announced a collaboration with former Pulp crooner Jarvis Cocker that will see the light of day on New York’s hardest working imprint, DFA.

The “Synchronise” single (which you can listen to below) will appear on an EP to be released in November, with a self-titled Discodeine album set to follow in early 2011. They’ve also just released a remix of Kitsune sweetheart Yelle, which you can check out here.

The duo have been producing together since 2007, when they found all important mutual ground around their love for sci fi movies, weird club music and south western French cooking styles.

Meanwhile Pilooski has been keeping up appearances on the solo front too, having reportedly spent much of 2010 working on his studio tan. The fruits of his labour will soon be found in remixes for Black Devil Disco Club, Tame Impala, Ali Love, Steve Winwood and Brian Ferry.