To celebrate the first birthday of Juno Plus, we are throwing a party with boutique Edinburgh imprint Firecracker, a label that has continually impressed us with a slew of superb EPs.

To be held in the intimate settings of East London boozer the Horse & Groom on Friday, September 10, we’ve got four of Firecracker’s favourite sons on the decks: Linkwood, Fudge Fingas, House of Traps and Discreet Unit. The five Firecracker EPs released so far have become stuff of legend, with limited 10” pressings replete with unique artwork that make them irresistible for the vinyl fetishists among us.

You’ll most likely already know Linkwood, whose insouciant fusion of deep house, jazz, boogie, hip-hop and Detroit techno – first heard in the early Firecracker releases – was showcased magnificently in his 2009 full length System, released on Trus’Me’s Prime Numbers imprint. Next up on the bill is Fudge Fingas, aka Gavin Sutherland, a fellow Scotsman who has been with Firecracker since it was launched in 2004. His debut album is slated for release later this year and we for one can’t wait for it to drop. House Of Traps (the main man behind Firecracker) and Discreet Unit round off a killer lineup which sees the Firecracker family and Juno crew join forces.

Supporting on the night will be a host of Juno DJs, including a couple of very special secret guests who will be revealed in the next fortnight.

PLEASE NOTE: We are doing a limited amount of £4 advance tickets which will guarantee you entry on the night. You can buy them from Resident Advisor here. Facebook info here. 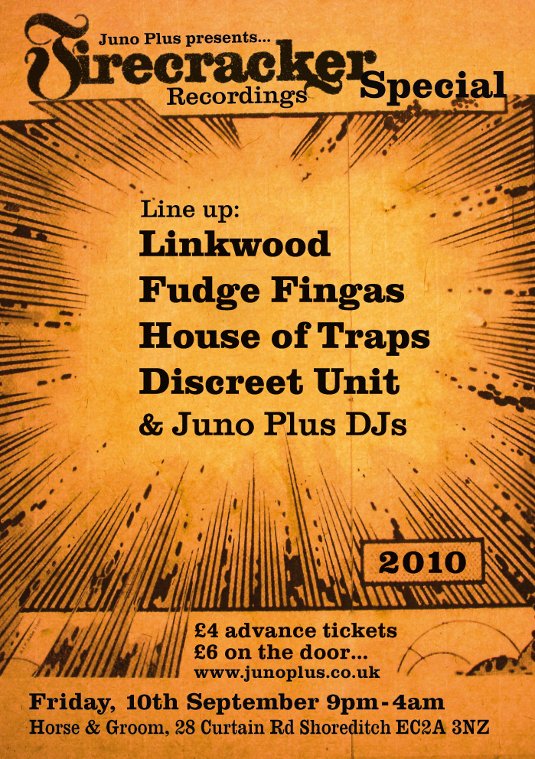