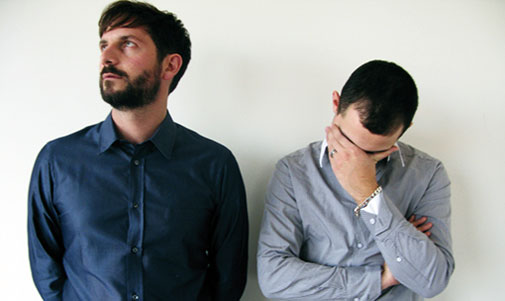 Belgian duo Aeroplane have announced details of a shock but seemingly very amicable split with main musical man Vito De Luca contuining under the name and production partner Stephen Fasano departing to do his own thing.

Aeroplane”s rise in popularity over the past three years is thanks in no small part to a veritable slew of stand out remixes from the Au Revoir Simone assisted reimagination of Friendly Fires in 2008 to the forthcoming Midas Touch-esque remix of Breakbot’s ‘Baby I’m Yours’ and the duo were even awarded the prestige of the 500th Essential Mix. Despite working together for over seven years, the more recent Aeroplane output has been overseen by Vito and it seems this was the reason for the split.

A statement by De Luca on the Aeroplane facebook page read as follows.

“Hi everybody, It has been nearly 3 years since Stephen and I released our first 12″ on Eskimo. Nearly 3 years since we’ve been doing remixes and touring the world as DJ’s with some success. And for nearly three years we have been enjoying every second of it. Maybe you don’t know this, but Stephen and I have been working together for more than 7 years now. 7 years of good and bad times. 7 years of creating different projects, exploring different directions.

Today, we are more excited and passionate than ever about creating new music. Except that since the last months Stephen’s vision and mine were going different ways. That is the reason why we decided that one of us should leave Aeroplane. Not to destroy it, but to make it last. Discussions were intense, and emotional, but Stephen is leaving me in charge of our baby. I will be, from now on, the one and only member of Aeroplane.

Why me? Just because recently, I’ve been responsible for most of the music and the studio work. Aeroplane became more mine than his. There is no angriness here, no conflicts to come, just a mature decision to save what we’ve been building together and that both of us do not want to see disappear.

Stephen is already working on new projects which you’ll be aware off very soon. Let’s wish Stephen all the luck in the world even though he doesn’t need luck, because he has got talent. He will be back with amazing stuff, trust me, I know him very well.

The only possible detrimental effect to this news will be for clubbers as Stephen plays an integral role in Aeroplane DJ sets, however the debut Aeroplane album We Can’t Fly is still on course for release in early September on the Wall Of Sound imprint.

The title track from the album, a glorious  slo mo groover with a distinctly Compass Point feel is out later this month.