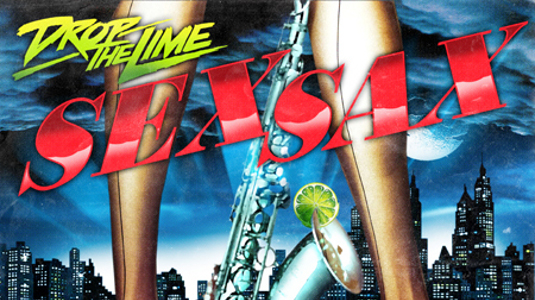 Drop The Lime will finally release new single ‘Sex Sax’ on June 21st through his own Trouble & Bass imprint backed with remixes from Sinden, MJ Cole and more, and has also dropped a few hints on what to expect from his forthcoming Fabric Live mix.

DTL aka Luca Venezia is our favourite pomade wearing, all singing, speaker destroying DJ and is very much the international jet setter at the mment having  hosted the aptly named T&B Temple of Boom at the Miami Winter Music Conference as well as apperances at Los Anegeles HARDFEST, Stereosonic in Australia and Lisbon’s Rock In Rio.

‘Sex Sax’ began life as a tool for these DJ sets but the sheer volume of requests has persauded Luca to fix the track up to look sharp enough for release. In true Trouble & Bass fashion, ‘Sex Sax’ is typical peaktime heavy basss fare with the addictive sax hook being bounced off punishing bass drops and unabashed wolf whistle samples and flirtatious ay caramnba vocal edits.

Trouble & Bass, being kind souls, have deemed the Bart B More suitable as a free taster

Luca will be responsible for the 53rd edition of the Fabriclive series, which is due to be released on 9th August and he intends to take the listener on a distinctly Drop The Lime flavoured  journey:

“I wanted to create a vibe with the mix… start off on a calmer note, and build it up to a climax but keeping it musically diverse and special, incorporating cutting edge left field club music with old and classic club and rockabilly songs. I added my own vocals doing VIP versions of other people’s songs to capture what I do as a DJ live.”

A Drop The Lime album is also in the works which promises to be a mixture of heavy bass club style with rockabilly and Ennio Morricone-inspired guitar hooks and bluesy/old NY/Chicago style house vocals.