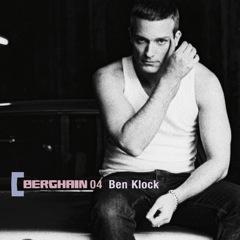 Berghain resident Ben Klock will compile the fourth instalment of the famed Berlin nightclub’s mix series, which will feature new and exclusive material from Martyn, Rolando and Klock himself.

Klock follows on from André Galluzzi, Marcel Dettmann and Len Faki in mixing a Berghain compilation, which will be released on the club’s in house label Ostgut Ton on June 28. His distinct sound – which combines relentless, industrial beats with a melodic sensibility cultivated in his upbringing as a classically trained musician – has become synonymous with the rise of Berghain to the world’s clubbing Mecca for anyone with a penchant for techno

Those who live within an Easyjet flight of the techno capital should also pencil June 12 into the diary, with Klock set to host the mix launch party on home turf.

The press release, written by German journo/DJ/label boss Gerd Janson, states: “When it comes to Berlin’s Berghain and its myth, we all know the deal by now: techno, concrete, marathon dances. Fact or fiction, Berghain 04 comes in the nick of time. It is impossible to reduce Ben Klock’s musical vision and especially his work as a DJ. Stereotypes and close-minded genre definitions have never been wished-for by the protagonists (Berghain and Klock) anyway and they won’t help you here.

“Klock turns all these ingredients into one long and harmonic blend. Without any sign of hectic or nervous breaks, but not without thrilling moments, peaks or valleys, turning points, Berghain 04 primes its listener for the climax of a long night out: the disappearance of space, time and the outside world. Akin to his album “One”, Ben Klock combines his classic appreciation of music, melody and hidden hook lines with the anonymity of solid machine sounds.

“These comparisons might be drawn with a worn-out pen, just like all the insufficient adjectives used to describe Berghain’s magic, but that is exactly what is achieved here. Ben Klock gets effortlessly and truthfully to the heart of a sound, a feeling and most of all an aesthetic. Berghain techno soul.”