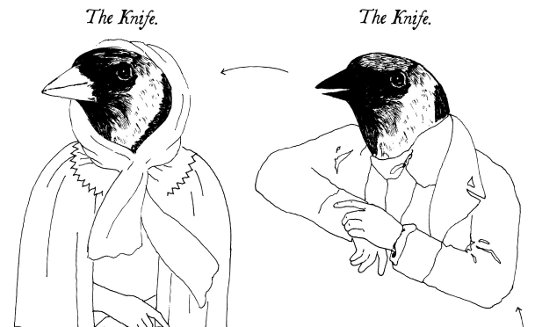 Peerless Swedish duo The Knife will release the studio version of their opera project Tomorrow, In A Year in March.

The project, a collaboration with Mt.Sims and Planningtorock, is adventurous even by The Knife’s standards.

It follows on from a landmark year for the duo’s female singer Karin Dreijer Andersson, whose solo album under the Fever Ray moniker adorned many a “best of 2009” list.

Commissioned by Danish performance group Hotel Pro Forma to write the music for their opera based on Charles Darwin and his book ‘On the Origin of the Species’, The Knife decided to make this a collaborative process, working with artists Mt. Sims and Planningtorock for the first time, to capture the huge scope of the Darwin and evolution theme.

They extensively researched Darwin related literature and articles, with Olof Dreijer (the other half of the duo) attending a field recording workshop in the Amazon to find inspiration and to record sounds.

Olof  says: “At first it was very difficult as we really didn’t know anything about opera.  We’d never been to one. I didn’t even know what the word libretto meant. But after some studying, and just getting used to opera’s essence of pretentious and dramatic gestures, I found that there is a lot to learn and play with. In fact, our ignorance gave us a positive respectless approach to making opera. It took me about a year to become emotionally moved by an opera singer and now I really do. I really like the basic theatrical values of opera and the easy way it brings forward a narrative. We’ve approached this before in The Knife but never in such a clear way.”

The Knife In Collaboration With Mt.Sims And Planningtorock – ‘Tomorrow, In A Year’ will be released 1st March 2010 in the UK on Rabid / Brille Records.