Remember Ed Banger? French electro exploded into everyone’s consciousness in 2006/07, only to be met with the inevitable backlash that comes with overexposure. DJ Mehdi was – and still is – at the forefront of this scene, but he was around long before the hype, and his quality production means he’ll be around for a while yet. From humble beginnings on the outskirts of Paris, Mehdi has become one of the world’s best party DJs. He spoke to Juno Plus editor Aaron Coultate about Hong Kong brawls, movie soundtracks and his new collaboration with Riton.

Tell me a bit about your new release, Red, Black & Blue – why did you decide to collate all your remixes onto one album?

Well, I’ve always said that remixing is all about beat-making and having fun. It’s all I ever do when I approach a song to remix. So it was only natural, after 10 years of doing it, to compile some of them. I think it’s a comprehensive tool to understand my own musical path – where I’m from, where I’m going, what has changed, what has stayed the same.

How did you decide which one to include and which ones to leave off?

First, there were some I just couldn’t hear anymore. Some sounded bad, others were just uninspired. Second, there was the legal factor: some artists, or record labels, just won’t let you use their tracks, even though they asked you to remix it in the first place. And last, the idea was to do a mix of it all, like a DJ set of my own remixes. So I had a hard time including the ones too slow, or too fast to be included in the mix.

Are you working on a solo album/material at the moment too?

Not really. I’m working with my friend Riton on some house music records right now. I’m shooting for my next solo album to be ready around September 2010.

How does it feel to be one of the senior members of Ed Banger now?

It feels great, although I don’t really acknowledge the term ‘senior’. It sounds a bit too much like ‘old’!

What music do you listen to in your spare time?

I listened to a lot of stuff, hip-hop, black music of all kinds, 60’s and 70’s British rock, and some jazz.

Which new producers are you finding most exciting at the moment?

I love Siriusmo, he’s my favourite producer right now. As far as DJing, I like Brodinski. He always comes with that new record you don’t know about, he keeps me on my toes.

How did you first get into DJing and electronic music?

It was through my family. I was always around records and turntables. I started DJing when I was about 12, it was always the natural thing to do in my house.

I was raised in the north-west ‘banlieue’ of Paris, in a small town called Gennevilliers. My mother and most of my family still live there. I listened to the radio a lot in the 80s of course. Plus some Arabic music. Then the first records I bought were US rap music, Public Enemy, Eric B, Boogie Down Productions, things like that. 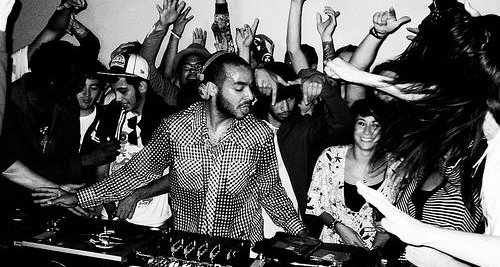 You have done some movie soundtrack work – how do you enjoy that compared to your normal production/remix work?

It’s always interesting to try to fit the idea a director has for a scene, mood-wise, atmosphere-wise. It’s also more “free”, if you will. There is no song format to think about, no verses, chorus and breaks. But, I have to admit, I do prefer songs and albums to movie soundtracks. It’s a completely different task.

What’s the most embarrassing track on your iPod?

Haha, that would have to be “My All” by Mariah Carey. I absolutely love that song (laughs).

You write your own blog over at the Cool Cats site. Do you enjoy blogging?

I love to write, I always have. The Coolcats blog is a good platform for me because is counter-pointed by Fafi, or Busy P who have a lighter take on things, and So-Me, who mostly blogs images and pictures, which is something I almost never do. I think together we make a good, complete team.

Where are your favourite places to DJ?

I’ve played in Europe, America, Asia, Australia … everywhere has been great. But I’ve always preferred DJing in clubs over festivals.

You DJ with CDs now – did you ever DJ with vinyl?

I DJ’d on vinyl my whole life – and still do occasionally. I have thousands and thousands of records at home. But it is just so much better with CD’s now, the possibilities are almost infinite, and I have more fun trying things.

If you could go back in time to DJ in any club, in an era, where would you go and why?

I love it now, I really do. Like, from 2006 to now, I had the prime time of my DJ life, I don’t have a nostalgic feeling for anything.

How often do you practice DJing? Do you ever get a chance to spin the decks at home or is it always in the club these days?

I need to DJ at least three times a week, just to stay fit. So, if I have two gigs on the weekend, plus a set for the radio or for a website to prepare at home, then I’m feeling good any given week.

What’s the craziest thing that’s ever happened to you whilst DJing in a club?

That would have to be the time I got into a fight with some thugs in a Hong Kong club, and somehow I was still on time for the next record to be mixed. The music didn’t stop once (laughs).

More beat making and having fun!