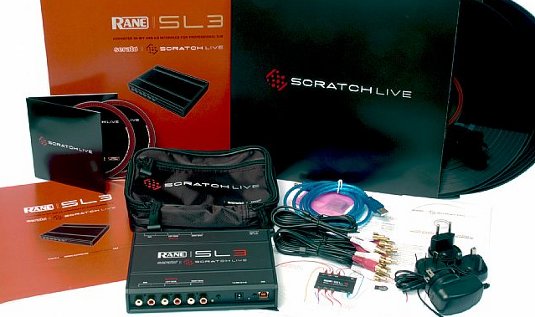 The Rane Serato Scratch Live SL-3 is the 2009 upgrade to the SL-1 interface. Ben Daly takes a look at what improvements have been made, as part of the Juno Plus roundup of  2009’s key DJ & studio equipment.

The SL3 is the current interface from Rane aimed at professional DJs. It’s designed to be used exclusively with Serato’s Scratch Live DJ software for scratching and mixing audio files from your computer’s hard drive using regular turntables or CD players.

Comparing the SL3 to the previous SL1 interface it’s easy to see that many new features and improvements have been made while some have been omitted. But does this update justify the extra £100 that the SL3 will cost you over the SL1?

In terms of build quality, the SL1 was virtually indestructible so there wasn’t much they could improve on with the SL3. However, the USB connection on the SL1 felt a little wobbly and flimsy, and Rane have taken this into account with the SL3, making it significantly sturdier.

With the SL3 Rane added an aux input and output; the input for Live Mix Recording or LiveFeed and the output to allow use of the sample player as a virtual deck. Rane also say that the aux output opens the door for future expansion and creative configurations, which we’ll just have to watch this space for. The Mic Thru has been omitted from the SL3, however the aux input/output can be used by feeding an unbalanced (RCA) line-level mic audio feed from a spare mixer channel.

The SL3s improved dynamic range and hotter output does make a difference but it shouldn’t be blown out of proportion. The 24-bit/48 kHz that the SL3 offers is more or less irrelevant considering that virtually all the music played through the SL3 will either be compressed MP3’s or at best 16-bit/44.1 kHz CD quality audio, which is as good as the SL1 anyway.

Hardware aside, the Serato Scratch Live software remains the same for both the SL1 and SL3 so this isn’t a concern when weighing up the two interfaces.

The SL3 is definitely an improvement on the SL1 but if these improvements are relevant to you depends on your requirements as a DJ. The aux input and output alone is worthwhile shelling out £529 for (over the SL1’s £429). Rumours abound that Serato Scratch Live will feature multi deck control in the future – that is certainly worth keeping an eye on.