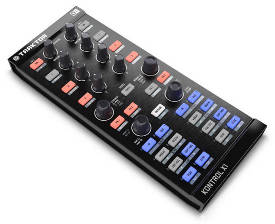 With a new overhauled version of Traktor LE software, The Kontrol X1 is a product that’s likely to cause a stir in the DJ controller world.

If you’re already a user of Traktor and don’t like using a mouse or trackpad to control Traktor’s looping, syncing and effects, then the Kontrol X1 is ideal.

With so many DJ controllers already on the market, it’s important to establish what actually sets this piece of equipment apart from the rest.

First, its buttons and knobs are already mapped out to work with Traktor straight out of the box, which for MIDI-phobes will save precious time and head-scratching while you try to figure out how your new bit of kit works.

It also has the robust build quality synonymous with Native Instruments, so it’s not likely to break no matter how heavy handed you may be.

All the buttons are backlit and have a solid, positive feel to them. The eight rotary knobs at the top of the controller feel like they could withstand a heavy duty working-over from even the most enthusiastic knob twiddlers, as do the four larger rotaries (which also act as push buttons).

The Kontrol X1 has a very simple intuitive layout, with the controls on the left half controlling left deck operations, while the right half is responsible for the right deck.

It doesn’t have faders of any kind, but as its main function is to control looping, syncing and effects, this shouldn’t be an issue for the intended user.

The Kontrol X1 ships with editor software so any control can be reconfigured to suit the user. It can also be used as a standard MIDI controller and mapped for use with any audio software to control virtually any parameter.

The Traktor Kontrol X1 will be released in February 2010, and has an expected retail price of £179 with shipping.