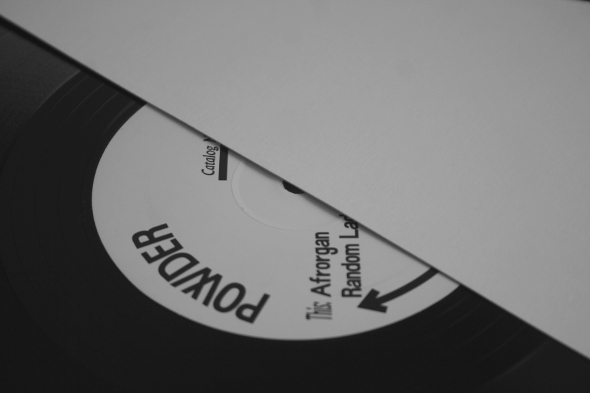 Powder: Somewhere to turn when house and techno is letting you down. With the sounds of Chicago and Detroit, to Birmingham, Bristol and Berlin so ubiquitous in inspiring producers everywhere, it’s nice to come across music that bends the musical hallmarks of those cities into something original. It’s said Powder comes from rural Japan and ESP Institute’s release of the Highly EP painted her as something of a character from a Haruki Murakami novel. The type trying to escape the nine-till-five life of cubic Tokyo by making supernatural music late at night. A previous turn on Born Free also felt as neon-lit as Tokyo’s world famous Shibuya district while in other sections it’s as serene her assumed pastoral homeland, but the genius of it all is this music comes from somewhere off the map. 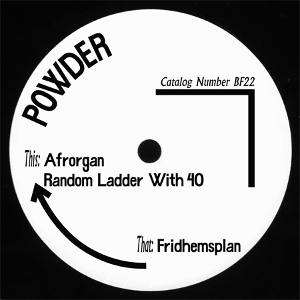 Afrogan provides Powder with a third release and with nine tracks out there already it’s safe to say Powder’s unique sound is now established – search out her 45-minute studio mix for PAMMIX for a fair thwack of her style. The title-track takes pride of place on the A-side, with a slightly indie, electro and pop number too good for the Kitsune label taking up one place on the flip. A tom drum heavy, lightly industrialised rhythm track maxes-out the B-side space as well, and in parts it’s reminiscent of Leo Anibaldi’s underground throb “Fusion 1” that was recently been reissued by London label Future Primitive. “Fridhemsplan”, it’s called, which sounds as though it’s powered by steaming pistons and humming generators; thermostats bleeping red warning signals. And the way it ramps up even more towards the end almost makes it worthy of an extended Dubfire rework like he did to Richie Hawtin’s seminal classic “Spastik”.

“Afrogan” however is much friendlier, not to say “Fridhemsplan” is mean – none of Powder’s music really is – but chimes and melodies, backed by the sound of water bubbling down a stream and farm yard percussion, are harmonic and sweetly tonal. Ride the groove into the classic Chicago house-styled chord progression and you have a track no dancefloor can deny. It’s a production you’ll practically hear scream ‘play me’ when the moment is right. Wedged in between “Afrogan” and “Fridhemsplan” – that I’ll pigeon hole as house and techno – is “Random Ladder With 40”.

With a bassline like something Leicester rockers Kasabian might knock out alongside bright, almost caustic synths and breezy vocals, it has a Towa Tei quality to it. It brings to mind his 1995 Flash LP which featured such people as Yellow Magic Orchestra’s Ryuichi Sakamoto and Atom TM – and of course, Kylie Minogue. Individual elements of Afrogan can be compared to a whole range of styles and artists – candied festival techno, the deep underground variety, to J-pop and classic Chicago house – but as a whole it’s uniquely Powder. Add a pinch of Japanese inspiration and it’s something to listen to on the Bullet train staring out at Mount Fuji for sure.