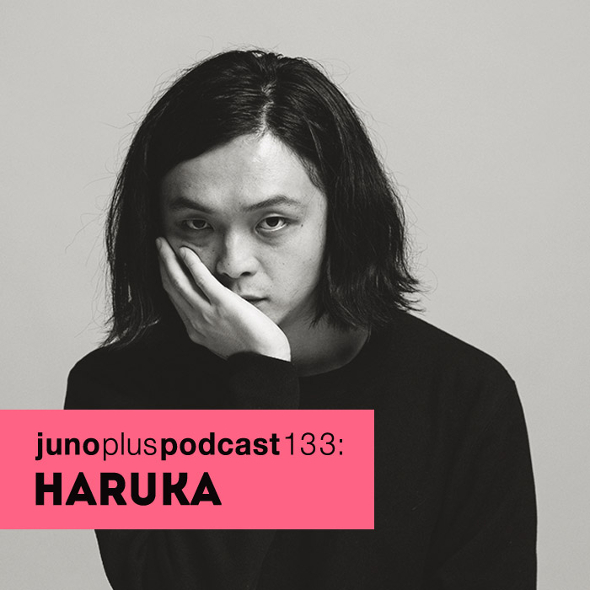 Tokyo’s Future Terror selector turns in just under an hour’s worth of his favourite deeper techno records.

When it comes to Japanese DJs it’s become increasingly clear right now that DJ Nobu is a fans’ favourite. Make your way further into Tokyo’s neon lit DJ circuit and of course there are many more selectors to be found, however few come with the Nobu stamp of approval. Haruka, though, does. A decade ago the former lumberjack supported Nobu when he made the 500km journey from Tokyo to Haruka’s home town of Tsuruoka. Three years later his aspirations to become a DJ full time took over and Tokyo in turn became Haruka’s permanent home, with the fledging selector working his way into the local scene to give the Future Terror party he now co-manages with Nobu that extra seal of quality.

With DJ Sprinkles alerting Western attentions to Japan’s fuzoku laws, which can restrict people from dancing in nightclubs, via her 2013 mix for Mule Musiq Where Dancefloors Stand Still, the idea of clubbing in Japan, for those who have never been, is still a little hard to fully comprehend. To help paint a clearer picture of Tokyo’s night life in 2016, Haruka has turned in a mix of “favourites” to present “a straighter techno set” that he says represents a sound you’ll hear him working today. Furthermore, with Haruka at the centre of Japanese techno, we felt inclined to send the rising DJ some questions to try and learn more about current Japanese club culture, particularly in Tokyo.

He did explain to us that even though the “number of young people in Japan is decreasing rapidly,” the knock on effect inside Japanese clubs isn’t detrimental enough to be considered doom and gloom. And in the words below expect to come across other local artists and DJs worth keeping an eye out for, like DJ Kuri, DJ Shhhh and Yazi, to Phonica-related artist Iori whom Haruka has hooked up with for a new party in the infamous Shibuya district, aka Town of Young People, called Ocean.

Hello Haruka, so this is quite a heavy mix. Is it a representation of your DJ sets?

Depending on when and where I am playing, my DJ sets can vary quite a lot. But for this mix I wanted to do a straighter techno set, something that represents my sound.

Where was it recorded and how did you decide which tracks to use?

I recorded this mix late last year. All the tracks I used are favourites. Most are from the last few years, but there are some old ones too.

How would you describe the state of clubbing at the moment in Japan, specifically Tokyo where you are based?

The environment surrounding Japan’s clubbing scene is changing. Japan’s economy is steadily worsening. The clubbers who used go out every weekend are not going out as much anymore. The number of young people in Japan is decreasing rapidly. These problems adversely affect the local scene especially. But there are also some good things. Now there are many good parties in Tokyo, like Mindgames, Rural, MNML SSGS, Frue, Terminus and many more. I really enjoy playing in Tokyo because the scene is composed of wonderful people: DJs, artists, promoters, club managers and staff, PA engineers, lighting staff. I feel lucky to be able to work with all of them.

How did you meet DJ Nobu, and how did you become resident DJ and co-manager of Future Terror?

I first met DJ Nobu 10 years ago when we got booked to play at the same party. This was in Tsuruoka, my hometown, which is 500km away from Tokyo. At that time I was working as a lumberjack. Three years later I decided to move to Tokyo to focus on DJing and Nobu booked me for his Future Terror’s New Year’s Eve party. At that time, I was determined to join Future Terror. These days basically FT is managed by Nobu and myself, even though some friends help us from time to time.

Could you explain to our readers what Future Terror is?

FT started 15 years ago in Chiba, a prefecture next to Tokyo where Nobu is from. It began as a house music party, then the style slowly shifted to techno. Now we do deep techno, but also sometimes we invite avant-garde electronic music artists. It is often goes on from Saturday night till Sunday night because the audience won’t quit. There is definitely a distinct atmosphere that separates FT parties (from the rest).

How important is DJ Nobu for Japan?

He has so much experience, playing for many years in Japan. His style continues to evolve, though part of it is consistent. He has become a representative DJ of Japan, while remaining in the underground scene. As passionate as he is about his DJing, he is also very caring about Japan’s clubbing scene. Often you see him inviting a potential unknown local DJ to play together. He is a great DJ, a party organiser, and a curator.

Are there any other Japanese DJs and producers you think we should keep our eye on?

First one is DJ Kuri. He often DJs long sets at FT’s after-hours, playing weird house and disco very slowly. Kuri, Killer-bong and I sometimes organise a small party called “Easy Listening”. Another one is DJ Shhhh.  He plays a very wide range of music from ambient, jazz, L.I.E.S, etc, extracting interesting grooves from many different kinds of genres. I check many DJs from all over the world, but I don’t know any DJs who do things like they do.

You are also one half of an improvisational live act called Twin Peaks with DJ Yazi? Could you tell us about that project?

Yazi has been DJing for 20 years and is another one who has a variety of styles for his sets. He belongs to an avant-garde hip-hop collective called “Black Smoker”. As Twin Peaks, we do a DJ and live hybrid set which is slower, heavier, and more abstract than my DJ sets. Right now we haven’t released anything yet, but we are working on it.

Are you working on any solo music?

Yes, I am working on tracks and hoping to get them released in the future. But for now, my focus is mainly on parties. Iori, who recently came back from Berlin, and I are launching a new series of parties called Ocean, which will be held in at a new venue in Shibuya called Contact.