The latest UNTHANK from Firecracker, plus records from Blackest Ever Black, Dark Entries, Nous Disques, Crazylegs and more feature this month.

Good things come to those who wait. Look up the etymology of this well-worn cliché and you may find it was coined by fans of Firecracker Recordings. With such intricate screen printing processes involved for all their releases, it is no surprise that Firecracker have an increasing aversion to concrete release dates when news of upcoming music surfaces from the Edinburgh label. Announced back in April, the eighth UNTHANK release from Lnrdcroy finally surfaced in records shops this month replete with a yet another wonderful two-tone screen printed pattern from Lindsay Todd. 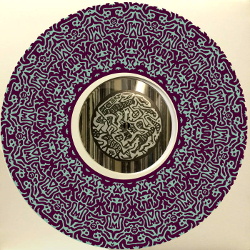 Still though, when it comes to delayed releases few labels could match Utter. Founded by London designer, DJ, and all round gent Alex Egan, Utter surfaced as label, event series and platform for creative audio visual projects in November 2011 and four years on their debut release arrives. Given that it involved archival material from Jam City man Jack Latham, who has been involved in some pretty big album projects these past few years, delays were understandable in Utter 1 reaching the shelves. Along with the music itself – some fine synthscapes scored by Latham for a short sci fi film – what made the 10″ presentation of Lux Laze so special was Egan’s design which took inspiration from the comic book aspect of the original limited release. The accompanying poster designed by Lux Laze director Daniel Swan was a very nice touch too.

Several Dark Entries releases have featured in this column before, thanks to the regular contributions of Berlin-based designer and illustrator Eloise Leigh, which have mostly consisted of ensuring the visual aspect of the label’s reissues are replicated as truly as the music side. November saw Dark Entries break with this tradition, on a 12″ presentation of tracks culled from various Severed Heads releases. As one of the tracks featured came from the Kato Gets The Girl VHS tape, the label tapped into the video synthesizers used for a brightly colored, distorted and eye capturing image. Further design input from Leigh as well as a postcard featuring artwork by Dru Jones and Sev Heads lyrics made it all the more attractive a reissue.

There is clearly something about the African Lion, their regality and majesty, that makes the big cat a perfect subject for record sleeve covers. Both Anthony Naples records on The Trilogy Tapes previously looked to the lion for visual inspiration, and so did Bristol based designer Devilmode for Ziro’s new 12″ on Crazylegs. With a title like Lionheart, such a decision was hardly a great leap of imagination, but the proud beast adorning the sleeve with the meanest poker face this side of a high stakes Las Vegas casino was definitely one of November’s most eye-catching records.

November was kind enough to grace us with two records from Tropic Of Cancer, both of which were visually strong enough to consider including in this column. The Stop Suffering 12″ sought inspiration from a photo shoot by Bologna-based Jasmine Deporta and ties in with some of the themes explored musically. But it is the art direction offered by Juan Mendez on Archive: The Downwards Singles that 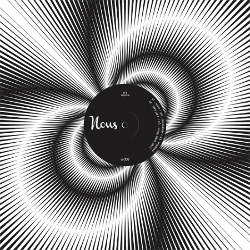 warrants inclusion here, continuing the dark and malevolent theme of his previous contributions to TOC releases on the label. For a record nerd such as me, the coarse brown paper inner sleeve was a delightful touch too.

Simeon Nomidis clearly has plenty of creative mileage in the two tone geometric patterns he’s currently implementing for Nous Disques releases, with each new 12″ surpassing the last visually. Really no further words are need to justify the swirling patterns of the Visions 12″ being included here. Equally, Dave Gaskath’s design on the first of several 12″s on The Death of Rave by Mumdance, Logos and Shapednoise’s project The Sprawl felt like a neccesary inclusion here. The front cover image being a fine visual homage to the cyberpunk classic Neuromancer penned by Gibson that inspired The Sprawl musically.

This column started with a cliché, so lets end on one too. Last but by no means least was the latest Dan White record from Australian artist Rory McPike which landed on Butter Sessions. From the off, the Melbourne label has been developing it’s own graffiti-inspired aesthetic and the Off Bluff 12″ featuring contributions from designers Lloyd MST, DJ Mind Twist and photographer Shane Hull was a fine addition.