As anyone who was brave enough to listen to last year’s Eat My Fuck album will surely attest, Jamal Moss’ I.B.M. project is not for those who like streamlined electronic music. Short for Insane Black Man, that 2014 album saw the Chicago artist push the raw, jarring take on house music he releases under the Hieroglyphic Being guise into a place where distorted chaos rules. Collecting tracks from the Moss archive spread over a ten-year period, From The Land Of Rape & Honey is for the most part very much in keeping with the disturbed thought process that guided Eat My Fuck. 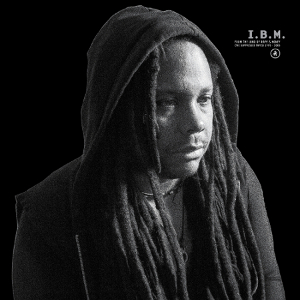 Opening track “2nd Soul of The First Body” centres on pummelling drums and  waves of noise that refuse to follow anything approaching a linear arrangement, with the kicks sounding like they are being pushed down a wooden staircase and in the background the screeching and wailing of a particularly pissed off  banshee. “A Madness Shared by 2” dispenses with the background noise and sees Moss hammer out a rhythm track that takes ownership of the term ‘outsider’ because its relentless drums are so lo-fi and unpolished.

Title track “From the Land of Rape and Honey” is another abrasive piece, and it makes clear the link between Moss’ work and that of artists from another Chicago institution. Granted, the track is laced with excruciating acid squeals, but its heavy rhythm calls to mind artists like KMFDM and Revolting Cocks/Ministry, who were strongly associated with the city’s Wax Trax label. More reduced, skewed acid tracks follow, with the dissected vocals of “Tribal Retribution” and the hardcore bass of “Babel” standing out.

Then, something unusual happens. Maybe it’s Moss just staying true to form by being the ultimate contrarian, but whatever the explanation, the closing tracks “Hate The Truth, Live The Lie”, and “Ministry” see him take his foot off the distortion pedal to lay down two down bleep-laden and dare we say it, mellow, techno tracks. If you want the sonic terrorism normally associated with I.B.M., it’s available in abundance here, but surprisingly, so is some musical honey.

A1. 2nd Soul Of The First Body
A2. A Madness Shared By 2
B1. From The Land Of Rape And Honey
B2. Tribal Retribution
C1. Babel
C2. Bless The Mission And Toil
C3. The Church Of The Red Museum
D1. Sanctification For The Heathens
D2. Hate The Truth Live The Lie
D3. Ministry