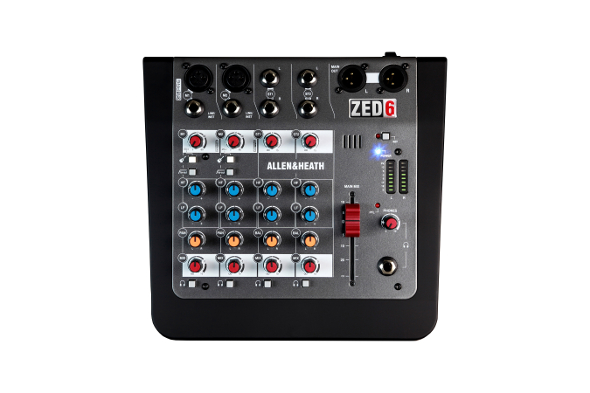 The Zed series of mixers from Allen & Heath have long been a popular draw for those wanting a truly analogue set up, whether in a live setting or a bedroom studio, with options spanning all manner of sizes depending on the specific needs of the user. After all the British manufacturer has plenty of past form in the field, and the Zeds in particular have been on the market for more than five years already. While there was already a relatively slim-line option available in the ZED-10 and its similar counterparts, now a new trio of mixers have been unveiled that even further lend themselves to portable and space-constrictive situations.

The Zed6 packs six inputs into its diminutive chassis, including mic and line inputs as well as guitar DI connections. The EQ may be limited to two bands but there is also a low cut filter included to tidy up any scruffy low end noise. As well as the standard edition of the mixer, an alternative dubbed the Zed6FX is on offer that packs in additional high quality reverb and delays, while the Zedi8 is a hybrid mixer and USB interface that includes dual inputs and outputs. Considering the size, it’s likely the smallest entries in the Zed range are likely to be seized upon by those with a few key pieces of outboard gear or those looking for a convenient gigging option that doesn’t take up precious bag space.

Allen & Heath will release the Zed6, Zed6FX and Zedi8 soon.