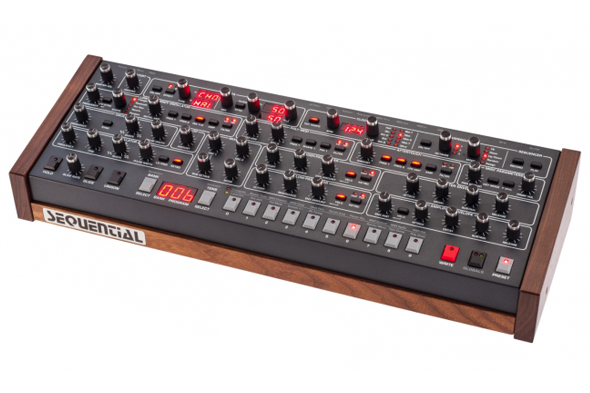 The compact module packs in all the features of the full keyboard version with some extra perks.

Back in January of this year the very welcome news broke that Dave Smith Instruments were releasing an updated version of the seminal Prophet-5, the classic analogue poly-synth originally released in the late ‘70s. It’s a bountiful time for modern reinterpretations of classic hardware, with a sizable amount of care taken to keep the circuitry and signal flow faithful to the original machines while fixing the bugs and increasing the functionality. As Robin Lee pointed out in his review of the Prophet-6, “previously, Dave Smith instruments had used digital oscillators on their flagship Prophet 12 instrument… this time we have been given discreet voltage controlled oscillators that are both analogue yet stable.”

Now DSI have unveiled a slimline version of the Prophet-6 that does away with the keyboard to become a compact, and arguably more portable module. The Prophet-6 Desktop doesn’t skim one jot on the sound, or the tweakability, though, with every parameter present on the control surface as it was on the main model, encouraging the company to proudly proclaim, “absolutely no menu diving.”

There are however two additional points of interest that expand the capabilities of the Prophet-6, no doubt in an attempt to entice in those who already snapped up one of the full-size synths back in January. As Smith himself reveals in the short but sweet video embedded below, the Prophet-6 Desktop allows for a longer keyboard by enabling as many octaves as you like compared to the five previously available. More significantly though, the newly added poly-chain feature means the current 1 – 6 note polyphony can be expanded up to a maximum of 12 with two Prophet-6s.

While the exact release date has not been confirmed as of yet, the Dave Smith Prophet-6 Desktop is expected to land in December and is looking likely to retail around the £1700 mark.