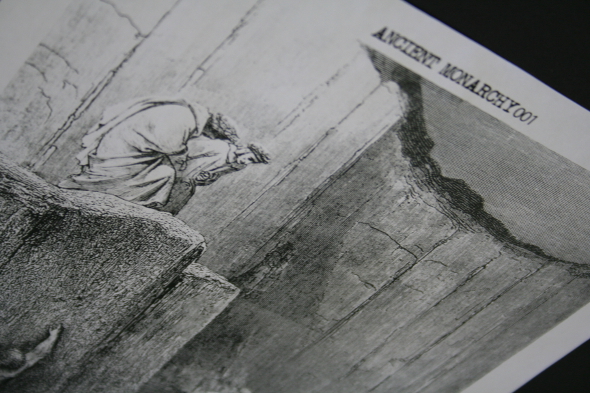 It’s been an impressive beginning for Rhythmic Theory, having carved out a strong identity among the Bristol-based labels the anonymous producer calls home. Noticeable jungle influences have been picked up on in previous reviews, but by and large these exist underneath a predominantly technoid exterior. Now the producer has been picked up outside of the immediate West Country family of Idle Hands, Happy Skull and BRSTL, with this single kicking off the Berceuse Heroique sublabel Ancient Monarchy and perhaps pointing to wider recognition for the shadowy figure. 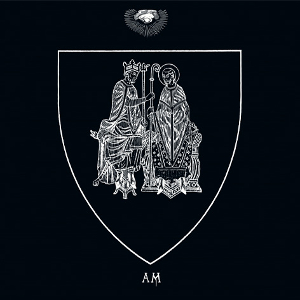 “Shores Of Caladan” comes to life draped in evocative pads that, through their careful processing, instil a very tangible sense of nostalgia. There’s an echo of Selected Ambient Works Volume II about the distant, distorted chords as they wistfully call out over a rippling kick pattern, and it would be quite easy to drift away on a track that consisted of nothing more. Being as this is a two track 12”, it’s more expected that something rowdy sits just around the corner, calling to mind those sweet, serene jungle intros before the snare rush. In this case, the beat comes bouncing in led by a snare jumping at its own delay shadow, and paired with a palpitating kick it makes for a crafty groove. The percussion gently feeds its way into this sparse new headspace, which revels in nothing but drums for some time before the haunting pad tone comes drifting back in to bring the piece full circle.

There’s an equally spacious pad tone on hand to fire up “Lucid State” as well, although in this instance there’s a much eerier mood being transmitted. Where “Shores Of Caladan” seemed intent on lulling the listener for as long as possible, its counterpart is a malevolent entity with bigger, bolder drums on hand and a more tightly packed arrangement. That said, the track comes flying in at alien angles which reverberate off the shuddering toms, speaking much more to the Livity Sound school of techno than anything across the pond. The rough and ready breakdown back to that sinister intro pad sounds powerful even deployed at the peak of the track, and it means that once again that jungle ghost can be felt lurking in the room.

Simplicity is certainly the key with the Rhythmic Theory approach, and it shines through on this single with its spacious lead-ins, direct drum patterns and uncomplicated structures. What makes these stripped back constructions have such impact is the power each sound possesses, from monolithic drum rumbles to icy-cold synth tones. This is far from what you would typically call minimal techno, but it’s the same idea of more focus given to less sounds that makes the atmosphere in Rhythmic Theory so rich and engrossing.

A1. Lucid State
B1. Shores Of Caladan