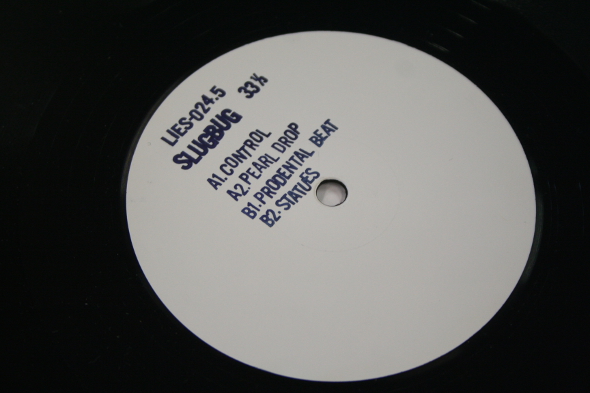 Slugbug sounds like it could be a particularly effective garden pesticide, but the reality is that this new artist is the latest addition to L.I.E.S. roster. Whatever your opinion about the volume of music released on Ron Morelli’s label and the quality control procedures in place, it does provide a platform for such new talent. This Untitled 12”, along with a concurrent outing on Russian Torrent Versions, is DJ Slugbug’s first release. Like Tzusing, another recent addition to the L.I.E.S. cause, Slugbug looks back in time to mine ‘80s sources. 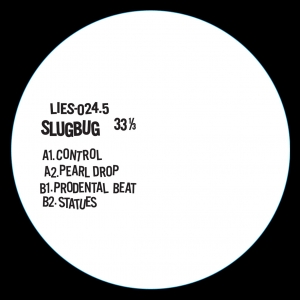 There’s no lo-fi tape saturation here though. In fact, the opposite is true and Untitled is remarkably stark and pronounced, inspired by the bass-heavy throb of New Beat, the jittery rhythms of industrial and contains traces of EBM menace beneath its surface. “Control” could be an outtake from the recent Silent Servant split 12” with Broken English Club on Cititrax, its boxy drums and murmuring vocals set against a snaking, relentless bass that seems to wrestle and fight the other elements for prominence.

“Prodental Beat” is in a similar vein; the bass is just as bleak-sounding, the drums and percussion judder and chatter hyperactively and a gloomy vocal bleats indistinct commands to the listener. “Prodental Beat” has an underlying sense of foreboding, but thankfully this isn’t a trip into Gothic self-indulgence. In any event, “Pearl Drop” on the flip side shows that Slugbug’s interest in dark moods is informed by electronic music rather than overblown rock tropes, as it veers into the electro of Detroit, its eerie synth lines riding fuzzy bass tones and rigid 808s.

Best of all is the closing track, “Statutes”. Here, Slugbug’s arranging is no less pointed than on the other compositions, with the strobe light pulses and marching drums creating a utilitarian but groovy sound. Added to this is a vocal that marries the tragicomic feeling that Italo singers possess with Portable’s bluesy laments. Once again, L.I.E.S. deserves praise for reaching out into the unknown.

A1. Control
A2. Pearl Drop
B1. Prodental Beat
B2. Statues