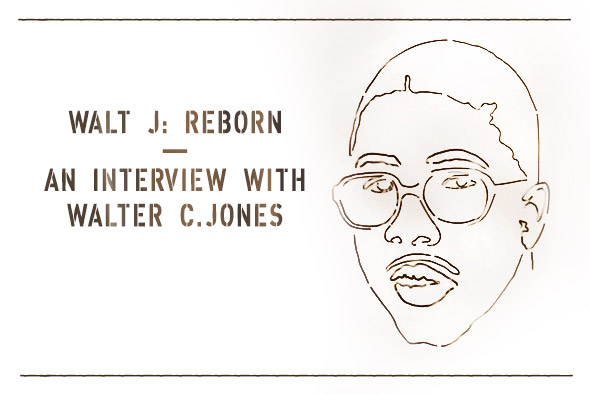 Thanks to labels like Fit and Curle, Walt J never really left house music, but the man behind the name did. In this interview with the enigmatic Walter C. Jones, James Manning finds out what the Detroit local has been up to for the past 15 years.

Where do you begin with someone who’s been removed from music for 15 years? As I found out, a simple hello, which then uncovered the house music mystery that was Walter C. Jones. Still based in Metro Detroit, Walt J didn’t disappear, life just took over he says. But house and techno always remained. “I kept my ear to the ground, I didn’t oversaturate myself, and I didn’t want it to influence what I wanted to do eventually.” And thanks to young French label Unlearn, that eventually is now.

Between 1995 and 1997, Walt J released seven records, mostly for Dow, a sub-label of Terrence Dixon and Claude Young’s Utensil, home to Dixon’s first three 12”s and his only LP so far as Population One. Before this Walt J released two EPs with friend and musical mentor Dave Peoples on the fleeting Vigilante Records. And as Jones recollects, it all began when he returned from the Gulf War at 22 years old and found work in a manufacturing plant. He met colleague Marvin Jenkins and just in passing, he says, their introduction was easy as, “Hey I’m such and such and I’m such and such and what do you listen to?”

“That’s when Marvin introduced me to Dave Peoples,” Jones says. “Dave Peoples was a good friend with Claude Young and Claude Young knew Terrence Parker so the link started to connect after that,” he explains. “They took me into the fold and said, ‘Hey, here, try to do something, just take your time, feel it out, learn the equipment, see what you come up with.’” These first exploratory efforts then resulted in Walt J and Dave Peoples’ Depth EP 1 – How Deep Can U Go.

Even though Jones himself has remained musically inactive for the past 15 years his records never left the house music consciousness, still holding the same relevance today as they did in the mid-to-late-‘90s. A contributing factor to this is Aaron Siegel who runs record label and distribution company Fit. In the three years since 2011 Fit re-released four Walt J EPs, while Belgian label Curle reissued the defining Reborn 12” via their Petite series. Tom Verhoeven’s label went the extra distance and had DJ Qu reinterpret the title track, resulting in the superb “DJ Qu’s Journey Towards Birth” remix. Walt J’s last record until now was 1997’s Reflection EP. It was Fit’s final splurge on Jones’ music with the release of last year’s Reflection Selections EP that lifted four cuts from the original six-track record. In the intervening time between that and June’s aptly titled Resurgence, Jones revealed it’s been multimedia and film that has kept him away from house music this whole time. “For the past ten or so years I have been submerged in media production,” Jones says. “I’ve tried to learn my craft with motion graphics, regular graphics, and directing is where I think I have the most fun.”

Jones is a Superman fanatic with the tattoo to prove it. Lining the walls of his studio are framed posters, signed photographs and other pieces of Superman memorabilia. In the midst of our Skype chat, Jones carries me over to his wall of fame and angles the screen to show a signed black and white photo of Margot Kidder who played Lois Lane in the 1978 Superman: The Movie.

“She signed: ‘To Walter…’ and I met her,” Jones says. Moving on he points out, “I met Jeff East, he played (teenage portrayal of) the Clark Kent character in that first film,” before panning past other signed photographs of Jackson ‘Captain Marvel’ Bostwick and Lou Ferrigno, The Incredible Hulk from the original ‘70s TV show. After that Jones says, “That poster there, that’s a short film I did. It’s about 15 minutes long, about Supergirl.”

“It was just a pet project that I wanted to do to exercise my skills to see if I could pull it off,” he explains of a film with a modest $600 production cost. The inspiration to direct his own picture came after his work on the opening title sequence for another fan film called Superman: Requiem, that had a budget of around $20,000, was met with praise, he says. “I’m just trying to catch a wave of something that would be more beneficial for me and that has longevity, which is one of the reasons why I didn’t stay with the music like I could have,” Jones adds.

“My first foray into music was strictly to get something out there because I love the genre, I wanted to make something of my own and once I accomplished that, life just took over,” Jones reaffirms. You put out seven 12”s in two years, I respond. “Yeah,” he says, laughing loudly afterwards like he still can’t believe it. “It was kind of a balloon-pop, a burst,” he remembers. “I guess I was so happy to just be making it and seeing my own vinyl.” 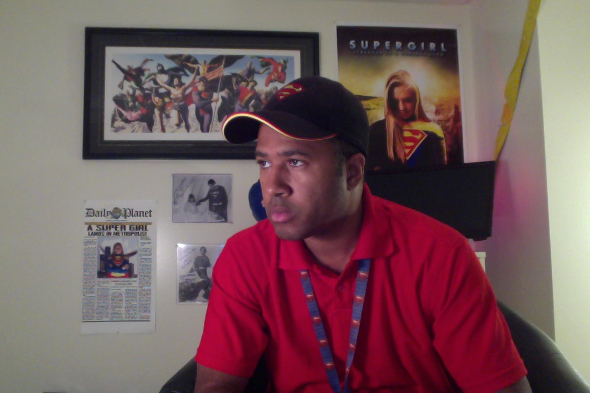 “Growing up in the inner city,” he says, “you’re really not… how can I say it without sounding like I had a bad childhood because I didn’t: you really weren’t told you could pursue things like that,” Jones recalls. “The avenues and the way to do it weren’t really available,” he says. “It was like an unreachable dream or an unreachable goal, so you always just kept it in your mind that that’s what you wanted to do but you really didn’t have a way, or really know anyone to help you reach that path to do it.”

Weeks before leaving for military service overseas, Jones remembers calling Derrick May after listening to Rythim Is Rythim’s Nude Photo. “Back in the day they used to have their telephone numbers on the record and I called that number and I was like I wanna talk to him,” Jones says. “He actually answered the phone; I told him, ‘Hey it’s Walter, I got one of your records and I think it’s the greatest thing and I’m off to the military and I just wanted to call and say hi,” Jones remembers (“I like just saying hi. I’m a hugger too, I like to hug,” Jones says later in our conversation). “Derrick was very cordial and was like, ‘Hey man, thank you for liking the music.’”

“It kinda stuck with me that the guys in this game are people like me, down to earth, regular old people, and from that point I knew I was going to make music like that. And seeing that little logo spinning with his name on there I was like: I’m gonna do that.”

“Like all the inner city kids I started out with rap music,” tells Jones. “LL Cool J, Run DMC, The Fat Boys, but then my uncle introduced me to “Good Bye Kiss” by Eddie ‘Flashin’ Fowlkes and I’m telling you, I think I wore the grooves of that record,” he says, “I totally left rap alone after that, as soon as I heard that record I was like: that’s what I like,” Jones says. “I couldn’t get enough of it.” 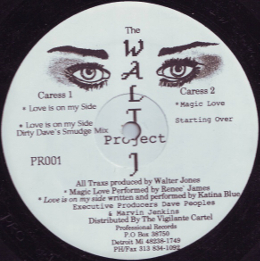 Following Jones’ first solo release, The Walt J Project, on Professional Records in 1996, Dow Records put out the Ascender EP, both of which were later reissued by Fit. Ascender in particular is loved for its untitled B2 where a toddler’s voice tenderly speaks the words ‘I love you’. Walt J’s trademark shuffling percussion patterns, snares and claps create the track’s brittle backbone while a dreamy synth completes this beautiful piece of arcane house music. “That’s my stepson” Jones explains of the vocal. “It’s weird now because he’s 19, his voice is so deep.” That EP was recorded when his stepson was four, and as Jones remembers, “I got the microphone and I said, ‘say I love you’ and I held out the microphone and he was like, ‘I love you.’”

Vocals aren’t integral to Jones’ music but those that do appear have a story to tell. “My wife sang on the Reflection EP, “Dance All Night”,” Jones says, while revealing the voice behind the ‘Tell me if I’m crazy’ sample on his new track “Love Petals” for Unlearn belongs to Kim Basinger. “Those were snippets from the first Batman movie, when she comes to the Batcave and she’s all like ‘tell me I’m crazy’.”

Every record Jones put out for Dow Records was in 1997, the same year he moved on from house music. Those four records defined the label and Jones remembers his friend David Whiteside being the one who taught him good rules of thumb and how to express the music, “Don’t let tracks go dry, always keep a track moving,” Jones recounts. “He gave me some good advice on some of the newer stuff I did with Dow and from there that’s where my style kind of gravitated, it kind of emerged as a hybrid of house and techno.”

To this day Jones plays with the idea of resurrecting Dow, but in the meantime he’s working on a new instrumental jazz endeavour called Staccato; EJM or electronic jazz music he dubs it. Which raises the question, how did Walt J get back into production? “Unlearn reached out to me on Facebook and were like, ‘Hey we’re starting a new label and we want to premier you on it,” Jones says. “I said, guys I haven’t done music in a long time, my whole mindset is geared toward media and film, I don’t have software or keyboards, none of that stuff – and they said, ‘Don’t worry we’ll make a small investment in you’,” Jones explains. “That’s when I knew I should revisit (production) because someone I don’t even know had enough trust in supporting me to come back and do it.” 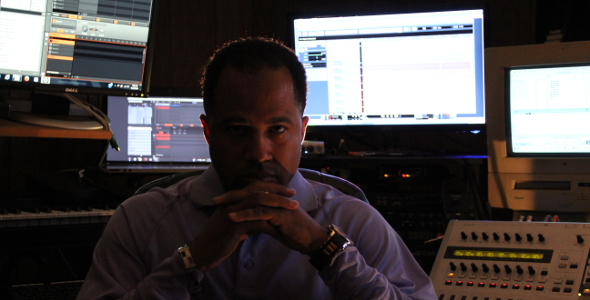 Unlearn sent Jones software and a keyboard with the instructions: “take your time,” and it took six months for Walt J’s Resurgence. “New technology is amazing. I love new technology,” Jones yells down Skype. “Dave Peoples still has the Mac we used to work on in the early ‘90s and I looked at the software and I was like, it’s so bland, so…pong.” Jones then describes his music now as a new sound with the same DNA. “The style today,” he says, “has so much poured into one track.”

“You have your deep bass with your melodic melodies, then you have the percussions mixed in and it takes you on a ride,” he says. “Back then people would have thought that was some strange spacey techno stuff, but now it’s like: that’s the stuff.”

So does Walter C. Jones have a Kryptonite, I ask? “The cliché answer would be myself,” he responds. “I can relate to Superman because I was adopted; being a transplant to another area,” Jones says. “I was born in Chicago but raised in Detroit,” he adds, while excitedly revealing, “it just so happens too, I was cast as an extra in the new Batman vs Superman movie that’s shooting here, so we shot two scenes and that’s like a dream come true right there.”