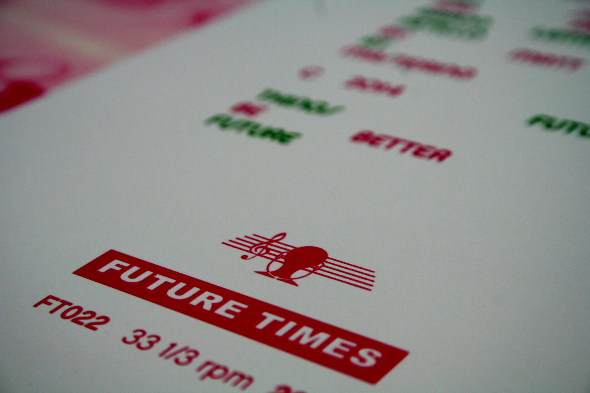 During the gradual rise to prominence of WashingtonDC’s Future Times imprint, most critics have focused on the off-kilter new age house and kaleidoscopic electronica of label co-owner Maxmillion Dunbar. Given that he’s been the label’s most high prominent artist over the last two years – thanks in no small part to a string of inspired 12” singles and the rush-inducing brilliance of his Beautiful Swimmers collaboration with pal Ari Goldman – that’s not surprising. This is, though, a little harsh on Future Times’ other co-owner, fellow DC producer Mike Petillo. From the label’s earliest days, he had a huge hand in shaping their distinct identity, not only from an A&R perspective, but also as one half of in-house production outfit Protect-U (alongside longtime friend Aaron Leitko).

Petillo and Leitko were responsible for two of the label’s earliest hits, the fluorescent new-age techno of “Double Rainbow” back in 2009 and the cascading melodic brilliance of the rather epic 2011 track “World Music”. Alongside Dunbar’s Max Tracks For World Peace 12” (also released in 2011), these records helped define the future shape of the now much-lauded DC imprint. In truth, it’s easy to overlook their output, particularly since they’ve not graced the label in three years, instead choosing to release their dreamy, off-centre house productions for the Soft Rocks affiliated Vibrations and the frankly impossible-to-pigeonhole Motorbike 12” for Planet Mu. Their debut album Free USA, then, is something of a belated homecoming and offers further proof not only of the imprint’s distinct voice, but also of Protect-U’s role in shaping it. Put simply, it would sound out of place on most labels, even their similarly inclined Canadian friends Mood Hut; on Future Times, it makes perfect sense.

The first thing to note about Free USA is just how positive it sounds. While the duo’s previous work has always been picturesque in a woozy, new age kind of way, here the synth melodies and dreamy chords shine even brighter. There’s an almost blinding vibrancy to tracks such as the fuzzy, cascading opener “Needs” and “Flying High” which is best described as a rush-inducing fusion of ricocheting synths, saucer-eyed chords and sweaty, off-the-wall Chicago house percussion. Even the album’s darker, murkier moments, such as the faintly foreboding DC futurism of “Top Hat” and huffing L.I.E.S-goes-new age assault of “Distorted,” come blessed with musical touches that veer from crystalline iciness to immersive warmth.

While there’s one sublime beatless moment – the sub-aquatic drift and shimmering electronics of “Dit Floss” – Free USA is defined as much by its distinctive beat programming and loose, left-of-centre analogue drum programming as its mesmeric melodic sheen. This is where Protect-U’s approach matches that of Maxmillion Dunbar. Their fascination with rattling snares, punchy kicks, hissing cymbals and snappy 808 handclaps is reminiscent of their affable stable mate, as is their ability to create rhythms blessed with jazz-style swing despite the rigidity of the analogue hardware utilized in their creation.

It’s this combination of pots-and-pans drum machine percussion and bright-and-breezy, ultra-positive synth melodies that defines the album. It also provides listeners with a string of highlights. Chief amongst these are two tie-dye techno classics in waiting; the sub-bass enhanced surging wooziness of “Flunx (Version)” and “Time To Technique”, a glittering slab of pulsating, undulating positivity whose relentless bottom end is matched only by its intensely picturesque beauty. Almost as jaw dropping is “Top Hat”, a faintly foreboding chunk of fluorescent house blessed with murky stabs and exotic melodies. Even when listening stone cold sober on a dank spring afternoon, it sounds like the aural equivalent of an endorphin overload following a few too many non-medicinal “extras”. Then again, that’s the Future Times sound in a nutshell; intoxicating, picturesque melodies, dreamy chords and ambidextrous analogue rhythms. Protect-U knows this better than anyone, as Free USA so amply proves.