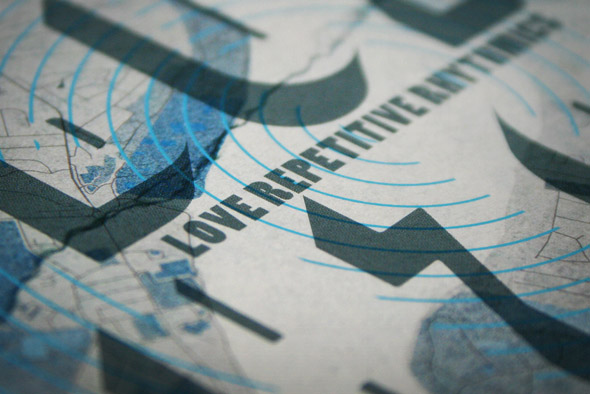 They don’t happen too often but there’s nothing like that rush of adrenaline to the head when you hear a great, inspirational record. The moment this writer heard Love Repetitive Rhythmics, it brought to mind the emotions felt when first experiencing all the other records that are cherished and personally held dear. Maybe it’s because there’s something charmingly naïve about it or perhaps it’s because both tracks are straightforwardly arranged without sounding too simplistic.

Whatever the explanation, this release from Buz Ludzha – who usually works as The Cyclist and whose real name is Andrew Morrison – is a special one. It’s hard to pinpoint exactly what it is that makes it that valuable, but it’s likely a combination of elements. For starters, neither track lasts longer than five minutes, which means that Morrison delivers his seductive message in a concise manner, not waiting around to serve up sloppy seconds. The other factor is his ability to draw on a load of influences but to express them in such a way that they belong to him.

“Basslines for Death” has the unmistakable Chicago kettle drums, but it also has distorted percussive licks, a murky bassline and melodic synths that start off in dreamy Detroit mode but end up sounding like they came from a sombre soundtrack. “Rave with Love” has the same grungy, bassy groove, but is more forceful than “Basslines for Death” thanks to its insistent filters. It does see Morrison flirt again with warbling melodies, this time they start tinny and high-pitched and have that flickery, detuned edge that Lone is known for.

But it’s not that easy to pin down. There’s a ghostly vocal sample buried deep in the arrangement and a synth sequence where it sounds like Ludzha has sampled or at least taken inspiration from early period New Order. Irrespective of how he made it, this writer is convinced that Love Repetitive Rhythmics is a great record.