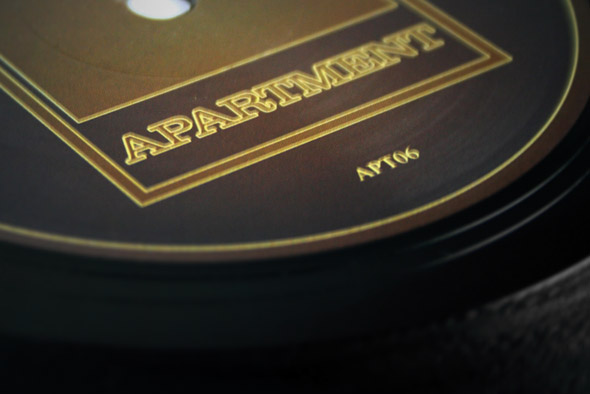 In the interests of transparency, I have to declare that I know some of the people involved with this record. Hopefully that doesn’t detract from the sentiments expressed in this review and it’ll have the opposite effect of making more people aware of Apartment. For those unaware of this label until now, it was set up by Kenny Hanlon a few years ago and so far has focused on putting out music by local talent.

In spite of the recession, Dublin and Ireland’s electronic music producers, clubs and labels are in the middle of a purple patch – articulating their own take on house, techno and electro. The difference now to ten years ago is that the Irish scene is compact rather than insular and this environment allows labels like Lunar Disko and Apartment to flourish. This writer’s favourite Apartment release came from Italian in Dublin Lerosa, whose No Mad Rush revealed his less-documented electro sound. Prior to 06, Apartment tapped another adopted Irishman, John Heckle, to share a release with Tr-One, whose “Viceroy 9-c” kicks off 06, remixed here by New Jackson aka Dave Kitt. Like Kitt’s string-filled release on Major Problems from last year, this reshape is a musical one, with gentle keys intertwined with mournful synths as furious percussion and tumbling drums provide the backing track.

From that point onwards, the release veers off in unpredictable tangents. Slowburn, known for their robust US-influenced house sound –  check their remix of Costelloe on Signal Code –  deliver “Riders of the Sea”, a queasy, uneasy soundtrack  underpinned by jittery electro 808s, while The Cyclist’s “Crax” is a dense, gloopy groove, its thick, grimy layers penetrated sporadically by minor key melodies that sound slightly out of tune.

06 leaves the listener guessing till the end, and the surprise comes from The Superior Inferior. “A Bit Much Confusion” is Apartment’s most intense track; with an aggressive bass pulse fused with a spiky rhythm and dubby drums as ravey synth lines guarantee a party vibe. Like most releases on Apartment, it’s hard to place and that’s what makes it so special.