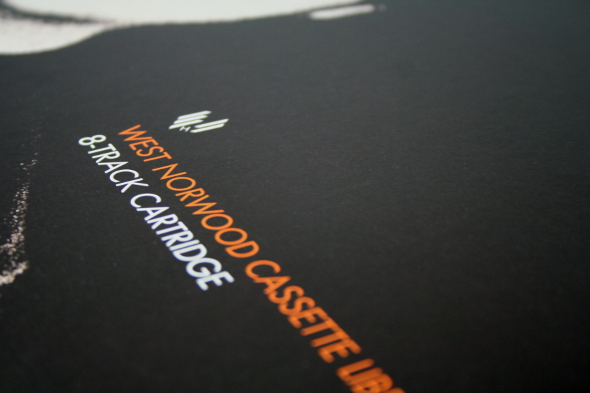 Bob Bhamra’s West Norwood Cassette Library venture exists in a confluence amidst the current whirlpool of electronic music. Upon first emerging his style seemed to fall in line with the splintering evolution of bass music, not least on singles such as “What It Is” and “Mrs Fingers” with their limber 140bpm broken beats and spacious arrangements. However since then his roughshod house sensibilities have shone through, both in his releases and his feisty DJ sets.

Of course eclecticism is no great shock amongst contemporary producers, but Bhamra’s own mixed set of stylistic values come from a unique brew that seems indebted to the cut ‘n’ paste swagger of hip hop as transplanted onto the ragged end of New York house and DIY UK hardcore, where an Akai sampler is king and no sample stone is left unturned. If that notion has grown increasingly apparent in the West Norwood Cassette Library output, then this collection of archive tracks on Hypercolour leaves no room for doubt. Gathered together from years of unreleased cuts and road tested dubplates, 8-Track Cartridge lets Bhamra’s house inclinations shine forth in an effervescent display of party-starting nouse.

“Acid Jazz” wastes no time in letting you know a good time awaits as a peppy 4/4 strut switches back and forth with a lick of Q-Tip before ripping into a funk break cut on the snappiest of guitar hooks, the jerky edits never letting up throughout. However beyond simple sample-a-delic house, there is another plain on which the track resides, as identified by the techy chord stabs and gnarly acid line that comes flying in. As well as being positively extrovert there is also a more psychedelic slant that acts as a neat foil to the hooky meat and bones of the breaks.

“(We Have To Live) In The Future” is more ostensibly wrought from deep house elements, but within that context come plenty of cheeky turns like the walking bassline, choppy vocal hits and dynamic breakdowns. “Innervisions” meanwhile heads into slightly techier territory with crafty interplay between different layers of synth in amidst the lively cavalcade of drums that fall with a weapons grade East coast bounce.

It’s not all straight-up house jams though, as is instantly noted on the slick roll of “Bubble”. The 303 that dominates the action slips in between an uptempo breakbeat that edges towards drum & bass by the time the track hits its stride, arguably taking on a more linear angle of approach compared to some of the other tracks on the release but no less rowdy. “Roots” swerves every which way it can from an electro outset via an audacious tempo ramp up into a brutal jungle clanger spat out by disheveled drums, only to slide back down to the even-tempered pace that propelled the start of the track as if nothing had happened.

“Body Rock” and “Time Loops” represent the milder tones of the release, the former sporting an easier set of samples that fall into a sunkissed funk, the latter delighting in chopping up sweetRhodesturns for an all-round bright and breezy finish to a decidedly bumping ride. Even in these moments, Bhamra is still knee deep in the edit, whipping beats back and forth with unflinching abandon.

It’s that imperfect attitude that makes West Norwood Cassette Library so damn fun to listen to. The clattering beats, the crusty finish, the flamboyant sample choice; it’s all underpinned by a delivery that simply comes off cool. Without a shred of pretention audible, Bhamra balances his leftfield leanings with a razor-sharp instinct for what sounds can engender a good time, and this EP proves he’s been doing that for a good long while.