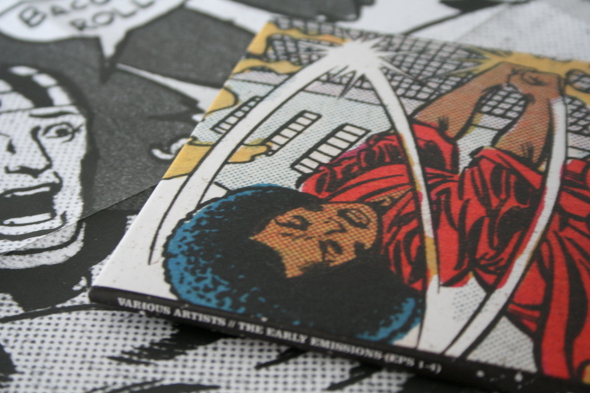 Records from Eglo, Public Possession, Optimo Music and Emotional Rescue all stood out for their own distinct reasons in July.

Whilst this column is largely dedicated to the attention to detail shown across various formats of vinyl, an exception had to be made for Firecracker’s wonderful presentation efforts on The Early Emissions CD which collated remastered versions of the Edinburgh label’s first four EPs. Housed in the thickest of cardboard gatefold sleeves that replicated their distinctive first 10″ releases, the collection also featured a wonderfully amusing Bacon Rolls poster and sticker which will clearly engender some nervous decision making from Firecracker completists.

In terms of vinyl, there was several notable examples of labels utlising clean, simple aesthetic measures to successfully garner visual appeal. Top of the pile was The Trilogy Tapes who excelled once more with their latest Tuff Sherm transmission with Mr Bankhead showing off his skills at pop art-style illustrations. Luke ‘Helm’ Younger’s Alter label adopted an even simpler approach for their issue of The Electric Belt 12″ by Hieroglyphic Being, housing the lurid yellow plate in five different yet equally distinctive coloured sleeves. Brussels label Vlek turned to regular artistic muse DimRun for the deftly printed cardboard sleeve that adorned their latest emission of gauzy electronics, whilst Golf Channel used just the haunting image of a cattle truck to help further convey the message of Juju & Jordash’s latest Golem release.

The award for most distinctive looking record in July undoubtedly belongs to Optimo Music and their limited first run pressing of Do Not Go Gentle Into That Good Night, their second offering from the amazing mutant disco troupe Golden Teacher. Much like Golden Teacher’s first offering, the band’s own Oliver Pitt was responsible for the artwork once again, and outdid himself with a hexagonal screen-printed, hand-cut sleeve. Not far behind in the immediately striking stakes were Eglo Records and Mordant Music releases. In the case of the former, it was their surprise 12″ issue of the 11 minute Floating Points spy thriller cut “Wires” which featured a wonderful gold print insert from Kay Shin, one of the label’s regular visual contributors. The latter label really went to town on Nothing Here Of Any Value, the split 12″ from Mordant Music themselves and the eMMplekz collaboration with Ekoplekz that featured a yellow corrugated stiffener and white wax insert with illustration work by Zeke Clough.

Antinote Records’ trust in the Checkmorris design agency seems to pay dividends with each of their releases, with Mathias Pol and Nicolas Motte adopting a diverse approach to each project without any sacrifice in the standards of quality. This much was evident in the rich screen printed sleeve art for their fifth release, from former former WT Records DJ Muscle flexer Geena. Stuart Leath’s Emotional empire of labels seems to be swelling by the day (it currently stands at four distinct operations) and amongst the many records these various branches released in July it was perhaps Village Green Studios’ simple two tone screen printed cover art for The Ganges Orchestra reissue on Emotional Rescue that stood out. Avian’s first foray into the world of artist albums did not deviate from their finely balanced focus on both the music and attention to physical detail as the STRGTHS LP from SHXCXCHCXSH utilised artwork from the mysterious Swedish duo themselves along with compatriot Linn Koch-Emmery across a deluxe double LP gatefold sleeve.

New record labels seem to be popping up every week right now, and three newly established operations stood out for their own reasons. Public Possession is a Munich label founded out of the city’s record shop of the same name earlier this year, and their second release from the search engine-unfriendly Australian producer Matthew Brown was adorned with a covering photo that could feasibly have been taken whilst they played his incendiary brand of rasping electro-inspired techno near to a pint of milk.

Glasgow club night Wrong Island Communications inaugurated their own move into the record label business witrh a 12″ from M|O|O|N| aka the polon loving 18 year old nephew of James Murphy. His brand of Syclops in anti-gravity mode mutant dancefloor sounds was matched by the covering shot of Madison McKenna courtesy of Brooklyn based photographer Drew Swantak. Finally, Berlin-based Marmo Recordings opted for the abstract visual approach on their debut release, The Decline Of Western Civilization Part 1 by the Tru West collective, which complemented the tone of the music within.