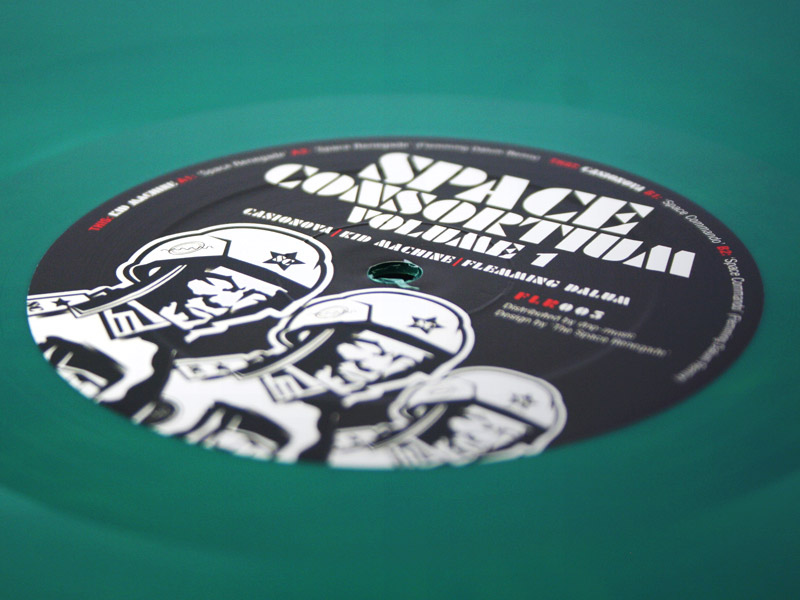 Flight Recorder Records launched last year and in a very short space of time it has managed to notch up some incredibly well received releases from Mushrooms Project, Cottam, Danny Dorado, Emil Strunz and Iron Blu aka Mickey Clarke. The latter runs Flight Recorder and is a bonafide veteran of music with a discography stretching back some 30 years – the fact Trevor Jackson included the 1981 track “Slipping Again” from his former band Naked Lunch on his Metal Dance compilation last year being a perfect example.

Space Consortium Vol.1 sees original material from Casionova and Kid Machine paired with remixes by “The Commander of the Beat” Fleming Dalum, and to say there is an 80’s feel here would be a massive understatement. This is music, made mostly on vintage analogue equipment, which unashamedly pays homage to the era of New Beat and EBM. Kid Machine’s “Space Renegade” feels like it could be the theme music to a film of the same name.

The obligatory chugging, arpeggiated bass line is interspersed with crisp, electronic hand claps and underpins a grandiose, chest swelling melody. While there is minimal percussion to distract from the marching pace, there are counter melodies that come and go throughout the songs 6 minutes and which give the impression of several movements within what would otherwise be an entirely heads-down track. Fleming Dalum’s remix is fairly faithful to the original, mainly differing via the arrangement and the addition of some more aggressive electronic atmospheric flourishes and some crunchier beats.

Casionova’s “Space Commando” is darker in approach, but it definitely feels like it’s from the same film as Kid Machine’s opener. While it also has a New Beat bassline, it remains utterly distinguishable from “Space Renegade” and possesses a more stripped back melody and a more obvious dancefloor aesthetic. Again, Fleming Dalum opts for a fairly faithful remix, and adds little more than bigger drums and some horror film electronics. However, these subtle changes manage to push the remix in to becoming a much bigger beast than the original and make it the stand out track of the release.

You could put the unashamed reverence for early 80’s electronics shown here down to the renewed interest in New Beat that’s come around thanks to the patronage of parties such as World Unknown and A Love From Outer Space, but they still retain an undeniable currency on today’s dancefloors. There’s a sense of drama that is so grand it’s bordering on the camp, and this writer feels it makes them a lot more interesting than some of the more contemporaneous music surfacing on other record labels.