The LiveJam collective are a funny bunch. Since emerging at the tail end of 2009 and slowly amassing an ardent following, the crew that comprises John Swing, Lucretio and EMG among their number have done well to keep themselves under the radar. Their whole ethos revolves around the analogue process (doesn’t everyone’s these days?!) but they seem intent on pushing a freeform, impulsive production process that doesn’t allow any 1’s or 0’s within earshot of their music making, from conception to cut.

The first strains of their output were certainly raw, almost to the point of distraction. While the ideas on those early LiveJam records were strong, and the grooves heavy, sometimes the gravel that sat on top of everything just got in the way. As was hoped in those formative years, the artists involved are getting a better grip on their ethos, and wielding it with more control. Now EMG is spreading his (or her?) wings, establishing the Experiential Learning imprint to carry out further studies into sound. As you might imagine, it opens up the scope for left-of-centre activities, even if the dancefloor remains a strong pull for many of the tracks delivered. 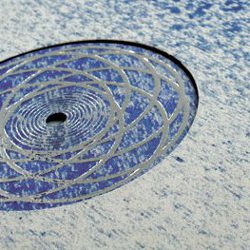 This four-track EP starts off on “Moving” with an unusual swing that bizarrely calls to mind Amon Tobin. Industrial slabs of percussion piston-pump around a loose groove, while various samples of orchestration call out a joyous cry of melody, creating a rough kitchen sink kind of funk. It’s not exactly the kind of jam that would carry its own weight in a club, but it really works. “Wavy” opts for a gritty minimal jack that eschews a solid kick in favour of monochrome percussion. It delivers its aim simply and effectively, even if it passes you by quite swiftly. Perversely, its successor “Here” is arguably simpler in its remit, but ends up feeling more effective. Delving into techno at an elemental level, the real marvel in this track comes in the handling of the kick, as nagging edits at the end of every eight bars hook you into the monotonous groove while disembodied smudges of sound dance around it.

If you weren’t already convinced that this endeavour is more about experimentation than dance music, “Now” puts paid to any doubt with a beatless exercise in atmospheric tone. It’s a forlorn chime that rings out in empty space, only to be accompanied by nauseating crickets of high frequency noise. As a closing point it neatly sums up what EMG is reaching for with this label. The results may be a strange middle ground between the floor and the homestead, but as with the earliest output from these curious minds, there’s great potential shown within that noisy mess.