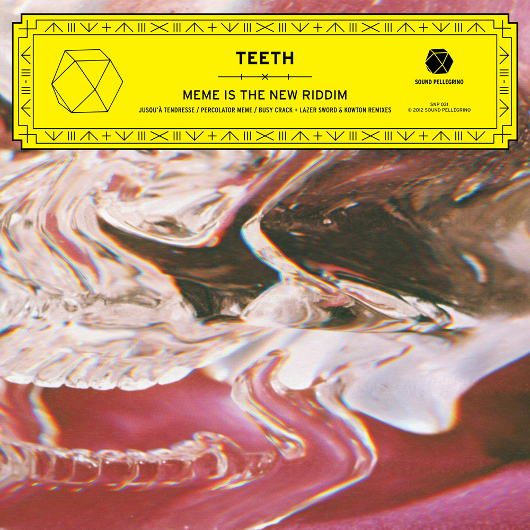 The latest EP package on the ever intriguing French imprint Sound Pellegrino sees some much welcome new material from Finnish producer TEETH backed by remixes from Lazer Sword and Kowton.

TEETH – aka Matti P – and Sound Pellegrino co-owner Teki Latex have shared roots in hip-hop, with the former a member of Ceebrolistics and the latter one-third of legendary French troupe TTC. TEETH’s first EP, Shawty, was released on Oneman’s 502 imprint last year. He has since been commissioned to remix Bambounou, Femme En Fourrure and Renaissance Man, and has started his own label, Signal Life.

A typically verbose press release from Monsieur Latex says TEETH’S “love for conceptual art and poetry, his atmospheric drowsy rap roots mixed by a love and fascination for 4/4 house and techno from Chicago to Berghain” laid the foundations for the Meme Is The New Riddim EP.

Meme Is The New Riddim comes in the usual Deutsche Grammophon referencing artwork and will be released on June 18, 2012, on digital format.