As intimidating as Rene Pawlowitz’s discography is, it seems fair to say that the first six months of 2012 will go down as not just the most prolific, but varied periods since he started producing. At this point there are six records that have either been released or are set for release imminently, across several aliases and spanning a gamut of styles from house to experimental dubstep. It’s testament to his talent as a producer that despite each of these records being ever-so-subtle variations on raw loop techno that the halo over his head has yet to slip.

Among all his releases this year however, one stands out – an anonymous, coffee stained white label simply marked “RAVE” with the runout groove info scratched out – which swiftly flew out of Berlin’s Hardwax store before most were aware of its existence. As an object it had all the hallmarks of Pawlowitz’s equally wily WAX and EQD white labels, and the music contained within – two tracks of little more than a clipped piano chords and bowel loosening kicks – were quite obviously Shed, though more the straight up house-inspired techno of his WAX material than the functional techno of the EQD moniker. Given Pawlowitz’s packed release schedule, it’s difficult to put a finger on why this particular record struck such a chord. 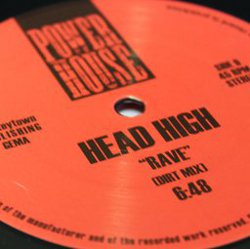 On the face of it, there’s little difference between these tracks and some of his WAX output – the euphoric stabs of “30003-B” spring to mind – but there’s something undeniably positive and visceral about the major key chords and unrestrained joy present in the tiny vocal snippet of the record’s A-Side and the uniquely crunchy quality to the manic hi-hats and mucky kicks of the flip side offering that don’t quite match up with anything else he’s done. The word “rave” comes with a lot of connotations – not all of them good – but what Pawlowitz achieves across these two tracks is to subtly riff on that idea and create something honest to the term, while at the same time flipping it right on its head.

Fast forward two months, and this same record has been re-released on Pawlowitz’s Power House imprint – the home to his Head High and WK7 monikers. Everything about Power House is intended to misdirect, from the purposefully vintage label design, to the obscure monikers whose names conjure up their own imaginary backstory. Pawlowitz has always been a bit of a trickster – the original Head High record is proof of that – but the callback to a largely defunct white label promo culture in the RAVE promo and its subsequent reveal is arguably one of the most successful postmodern engagements with a way of DJ life that has been for the most part replaced by mundane digital promos and underwhelming YouTube rips. If anything, this full release doesn’t take anything away from the myth of the original RAVE, it simply adds to the appeal of both. It’s difficult to explain the appeal of such a functional set of tracks to a casual observer – and the aura that the RAVE promo has created around this full release is the kind of thing only true vinyl enthusiasts will ever truly identify with – but for those in the know, the excitement this record inspires is exactly the reason we persist with our quaint and outdated hobby.