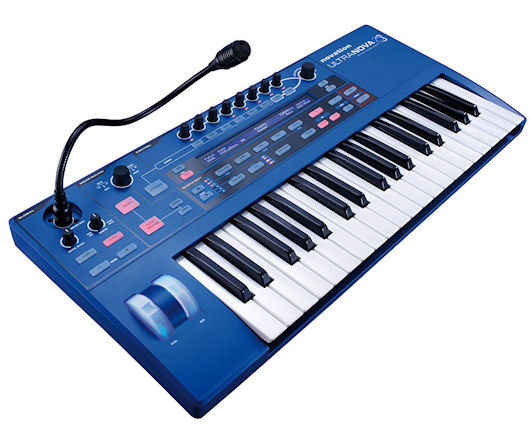 Having taken a detailed look at M Audio’s Venom earlier this year, we now get to grips with another heavyweight contender, the Novation Ultranova, in the second of our virtual analogue synthesis showcases.

For those of you unfamiliar with synth jargon, a virtual analogue (VA) synth generates the sounds of traditional analogue synthesizers using digital signal processing (DSP) components and software algorithms to simulate the behavior of the electronic components. Regenerating the analogue sound is something Novation have nailed; first tinkering around with digital oscillators and analogue filters in their legendary Bass Station, then progressing with the analogue modeled Drumstation, before cleaning up with hits like the K Station and Supernova. And now, following a four year hiatus, Novation step back into the game with their most versatile offering to date, featuring an updated synth engine based on the Supernova II. Designed in England and made in China, the Ultranova is a VA subtractive type 18 voice poly synth with three oscillators featuring two ring modulators, with a noise generator for each voice. It has 14 filter types (see specifications table below), plus 70 different waveforms, 66 destinations and five effects slots per patch (more on this later). It’s also got a 2 in, 4 out soundcard and the pitch and mod wheels glow with a cool blue back-light. 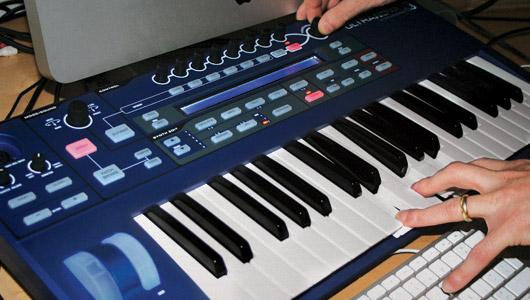 At 72.5cm in length and 37.4cm in width, it weighs in at a manageable 3.6kg, with 37 decent sized semi-weighted keys (with velocity and after-touch) making it very playable, not to mention portable. The blue plastic casing is about as sturdy as you’ll find on a unit in this price range, and on close examination it is well-moulded in two sections which sit flush with each other. A quick glance of the top panel confirms that everything is laid out in a familiar manner (most synth enthusiasts will agree that if there’s going to be a wheel re-invention, we’d rather it was done under the bonnet). From left to right we’ve got four modules, the first of which, Global, houses smooth turning knobs for master volume and monitor (you can mix between host and synth/inputs), plus two pink backlit buttons for setting up audio and general settings. There’s also a sunken XLR female input for connecting the included gooseneck cardioid microphone, which can switch octaves with the +/- key.

Next up is the Mode/Sound section, which lets you navigate the synth/patch browser with a satisfying push to make step encoder, plus compare and write keys. The upper-most central section, Control, is built around a 19cm 144 character LCD screen crowned by eight detented touch sensitive encoders. These can be used for triggering LFOs/filters/FX (literally with a touch), plus all sorts of on-the-fly tweaking of the filters or minute precisions of the synths’ inner-most workings. Below this, there’s a row of buttons exclusively for use with Novation’s Automap software (this allows you to assign controls between your hardware surface and DAW – especially useful for assigning the knobs to other soft synths), plus a filter knob. Lastly, the synth edit controls are straight forward, with each of the main parameters or functions having their own button which opens up a menu on screen; you can toggle between these (i.e. oscillator 1-3, envelope 1-3, LFO 1-3, filter 1-2 or effects 1-5) by means of the up and down cursor keys.  You can also access the vocoder from here with further buttons for arp, chord and the versatile tweak and touch animate buttons. Flip the synth round and the rear panel sports a cool 2 x ¼” TRS jack inputs and a further pair of 2 x ¼” TRS jack outputs for the soundcard. Headphone output, expression and sustain pedals are represented by a singular ¼”  TRS.  Completing the connection possibilities are 5 PIN DIN MIDI in, out and thru, plus USB for bus power/data transfer with power distribution handled by a 12VDC 300mA supplied power adapter (or wall wart if you want the synth-boffin terminology). So with the preliminary checks over, let’s fire her up.

Aside from the Ultranova’s obvious performance qualities it also comes with its own on-screen editor (pictured above) which you can load into your DAW, making the workflow practically the same as a VST instrument (although the sound is still generated by the Ultranova). The standalone patch librarian allows quicker access to the patches (as opposed to scrolling on the Mode/Sound encoder itself), meaning you can grab and send at will. For most, the first port of call when buying a synth such as this would be to have a decent jam on the presets, of which there are four banks (the last being empty) of 128 which are labelled either by genre (techno, house, dubstep, D&B/breaks, industrial, jazz, rock/pop and classic) or category, which we actually quicker when it came to identifying the one for the job. The categories include SFX, lead, drum, arp, movement, keyboard, pad, poly, vocoder and bass. The sounds that you’ll encounter here are of incredibly good design – instantly usable in this boxfresh format, or you can just scratch under the surface and get in there with the individual components to make each patch your own.

Moving on to the blood and guts of the instrument; first up are the the oscillators, which are missing FM (not uncommon) but have 20 digital waves and 36 wavetables (nine per table), meaning there is no shortage of possibilities. You can detune these to your heart’s content, essentially stacking multiple oscillators to create “supersaw” waveforms without any loss in polyphony. Controls include oscillator pitch, pulse width, wavetable index, level and sync. Looking at the other sources, the three active LFOs are equally tasty, with a sneaky fourth in there for vibrato purposes. Of the six envelope generators, the first two are routed to the amp and the filter section, while envelopes 3 through to 6 are used for modulation. From the output of the amp, five FX slots allow the sound to be processed before it hits the stereo outputs – very nice. The effects consist of distortion, compressor, delay, reverb – all up to 2 instances, chorus/phase – up to 4 instances, gator, EQ and that all important vocoder, which sounds excellent although should be treated with care to avoid clipping. 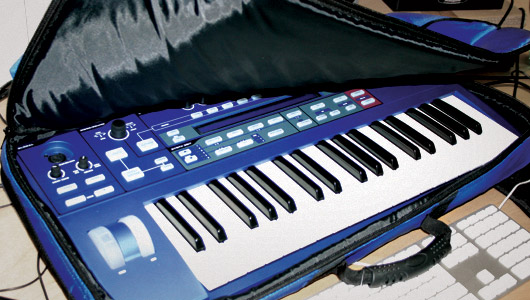 The Ultranova performs well on all levels; you’ll soon get to grips with the menus – which don’t pose problems in the live environment – and if you’re not feeling the workflow, the editor is visually and informatively as good as any soft synth you’ll find at the moment. The fact it talks to the Librarian means you’ve got an immensely flexible, not to mention powerful, system at your fingertips. Our initial thoughts were that this synth would be more suited to the more digitally-inclined forms of dance music – however there are some fantastically warm and organic patches, not to mention the effects, which will smooth over anything that might seem initially abrasive. The fact that someone with little or no synthesis knowledge can build their own patches with relative ease will make this a great investment for those thinking of buying their first hardware synth. For an extra £40 you can pick up a gig-bag (see above).