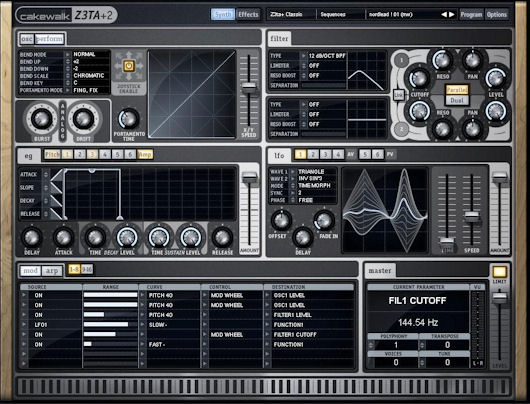 Roland’s Cakewalk strikes back with what looks to be the biggest overhaul the Z3ta+ (pronounced (zay-ta) synth since acquiring it from RGC:Audio back in 2002 with the Z3ta+2.

For those of you who weren’t  familiar with the original incarnation, it was a PC-only 32-bit wave-shaping synthesizer with an interface similar to that of an analogue synth. It had six oscillators with 60 built-in waveforms and six user loadable waveforms, which could be edited by either re-drawing the waveform or using the 14 waveform shaping transitions. These were backed up by four filters with ten operating modes, plus six LFOs, an algorithmic and MIDI arpeggiator and a 16 row modulation matrix with 24 sources. Aside from the EQ there was also an army of on-board effects and you could design your own patches from scratch or tweak the 768 or so factory presets (sorting through these was notoriously time consuming). The Z3ta + synth found fame with dubstep producers craving that distinct wobbly bassline, and trance heads requiring that uber-crisp digitalism to their pads.

“You don’t need to be a geek to use this synth, as straight out of the box you’ll get some fantastic results which are perfectly usable in everyday production – but you’ll probably find yourself turning into a geek the deeper you delve”

Fast forward to 2011, and we’re graced with a completely re-designed user interface. Gone is the retro cool blue fader dominated face panel and in is the sleek black, informative yet performance based display featuring large waveforms for oscillators and LFO, plus graphically controlled envelope generators and easy to (MIDI) assign rotaries/sliders. Speaking of oscillators (see below), these are housed in the top left hand segment of the interface, and in OSC mode have eight modes of operation which range from NSYNC (where the polarity is normal with key sync) to Synchronised Multi Mode, which turns a single oscillator into eight with split output. Then there’s the simplicity of the two fixed frequency modes, where pitch is not key sensitive, with the option of phase restart with note on events. On top of this there are five oscillator modulation modes which consist of normal, ring, phase, hard sync, and frequency modulation. All of the oscillators can inter-modulate using Z3ta’s circular inter-modulation functions, so that OSC1 could FM modulate OSC 2, which could then ring modulate OSC 3, and so on. The oscillators have two output busses which are routed to the two filters, which in turn can then be tweaked and panned for mono or stereo use.

The addition of Performance Mode is a particularly beguiling feature which allows you to modulate two parameters simultaneously on the XY pad – this can either be controlled by your computer mouse/trackpad, MIDI or even a gaming joystick. The best thing about the Oscillator section is the Waveform Shaper, which allows you to literally pull the shape around with the corresponding adjustments being heard in real time. This is great as once you’ve experimented with the various wave shapes – and the kind of sounds certain manouvres will yield – you can really speed up your work rate on stage or in the studio. Alternatively, you can use any of the shaper transformations (which include a couple of new additions) in the form of warp, twist, drive, window, offset, wave, bit reduction, shrink, self-sync, multipoint, low/high pass filter, fold, spectrum, random or all/odd, which have their own slider which also morphs the waveform in real-time. Another useful feature is the waveform display preview on the preset menus, which’ll save you time browsing.

“The addition of Performance Mode is a particularly beguiling feature which allows you to modulate two parameters simultaneously on the XY pad – this can either be controlled by your computer mouse/trackpad, MIDI or even a gaming joystick”

Moving downwards is the envelope generator module, which, after being ambushed by all of this new oscillator technology, was refreshingly classic in terms of design. This houses eight generators, six of which are of the unipolar five stage type, with selectable curve for each stage. The other two are for pitch (bipolar) and amp. All have a delay knob, which enables you to set the time between note-on event and the start of the EG. There is also an amount fader which can set the EG into both positive and negative positions. Moving across to the top right hand side of the interface, there’s the filter section whereby each filter is located on a bus and can be routed to either operate in parallel or duel modes, the latter effectively splitting two 36dB/Oct filters into a brace of 72dB/Octave filters by putting two in series on each bus. You can also link the control features of both filters together, although this sets both controls at the same level rather than kicking in at each control’s current value. The filter parameters available are filter type (14 choices), limiter, resonance boost, cut off, resonance, pan and level, which should satisfy even the most discerning synthesizer user.

Finally, below the filter section are the LFOs (see below). There are six of these badboys (each of which consists of two independent LFOs) with 60 preset waveforms and the facility to design your own user waveforms. The fun really starts when you start combining the two waveforms and jamming with them in the 11 LFO modes which will yield some incredibly varied results. The speed (0.01Hz to 20Hz) can be synced to a host tempo and tweaked by any modulation source. Running directly below and occupying the entire bottom section of the interface is the 16 row modulation matrix editor (see below), which is also reassuringly classic in design and can be used to link any of the synths parameters or effects to your modulation sources. The controls on offer are source, range, curve, control, and destination. You can assign an LFO to filter cut-off when making wobble-bass. Flip the corner tab and it opens up the arpeggiator, which will either play standard arp patterns or you can load in one of the countless included MIDI files, or your own. Below this is an optional preview ribbon which sends MIDI note on messages. Behind the synth’s front panel are the effects, which consist of drive (distortion, saturation, over-drive), chorus, flanger, phaser, compressor, three different types of delay, reverb, a seven-band graphic EQ, simulator, decimator and limiter. They are laid out logically and can be used individually, as combinations or all at the same time. They can be modulated in real time as destinations in the Modulation matrix or controlled via MIDI.

On top of the classic Z3ta content we are graced with 1000 completely new programs which you can sub-categorise in the showcase menu by arp, 2 x banks of bass, keyboards, hard and soft leads, pads, percussion, 2 x sequences, short and plucked synth, simulations, sound effects, texture and synthesizer. Using the aforementioned controls it’s very easy to get the exact sound that you’re looking for, and indeed due to the spontaneity of the workflow you’ll push your sound sculpting skills to startling new levels. That’s not to say that you need to be a geek to use this synth, as straight out of the box you’ll get some fantastic results which are perfectly usable in everyday production – you’ll probably just find yourself turning into a geek the deeper you delve. Check out the audio clips below for more examples of the Z3ta  + 2 content, and keep your ear to the ground for news of third party manufacturers who are already busy designing additional sound-banks. [Find out more at Juno]