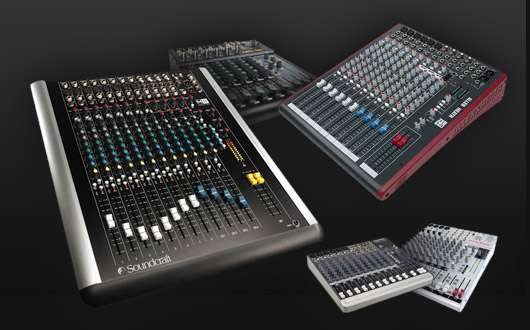 Despite the technological advancements of many audio interfaces, the home studio mixer is still very much a central feature in the humble musician’s place of domestic refuge. They bring to life a motley crew of microphones, samplers, synthesizers and guitars whilst maintaining strict order before sending them to your computer and monitors. The latest instalment in our Best series seeks to to outline the characteristics of five of our top selling mixers in and around the £500 price bracket. 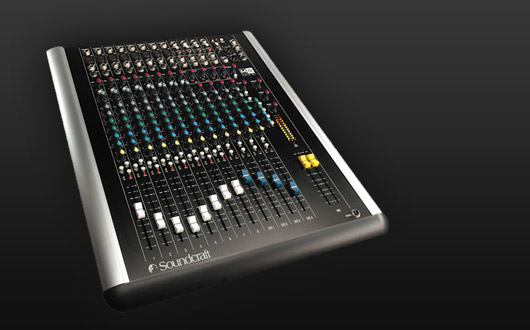 Soundcraft have been making professional mixing consoles since the vast majority of you have been in short trousers (well since 1973) and are largely responsible for what people in the know call “The British Sound”. The M8 is the middle sibling in the family that also consists of the M4 and M12, with the numeric part of the name representing the number of mono channels. Here we have eight mono inputs, four stereo inputs and four stereo returns which are all unbalanced over ¼ TRS jacks. Each of the eight mono channels strips have their own direct out and insert over ¼ TRS plus Neutrik combi female microphone XLR inputs supporting low noise, low distortion RF rejection mic preamps – although there is no visible line/mic selector switch. The EQ section comprises high (12kHz) and low (60Hz) shelving sections plus a sweeping mid that can be set between 240Hz & 6kHz. All three bands have ±15dB gain and there’s a100Hz, 18dB/octave high-pass filter at the top of the strip. As you’d expect there is a standard pan control knob plus buttons for mute, direct pre and PFL monitoring. The stereo channels are slightly more basic without the swept mid or low-cut switch with two balanced line inputs, no mic input, no inserts and no direct output. The 100mm faders are great for smooth mixes or accuracy out in the field. There are signal and peak LEDs on every channel and high resolution output metering. Build-wise, it’s pretty much spot-on. The beveled brushed steel side panels can withstand a weight of 60kg, which in studio technology terms is about as robust as it gets. [Find out more at Juno] 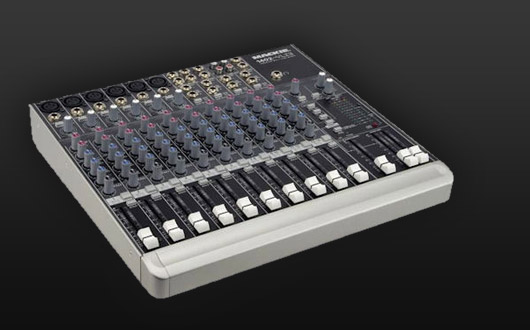 Mackie are the champions when it comes to bringing professional quality audio products into the home at a price that puts smiles on faces. The 1402-VLZ3 is a rugged, compact desk with a contemporary beveled aluminum design that boasts an internal shock-absorbing support structure. Its high headroom channels are split between six mono (with RCA inserts) and four stereo featuring 18dB/octave 75Hz lo-cut filters on the mic channels plus six studio quality XDR2 extended dynamic range preamps with 60dB gain range, 130dB dynamic range plus +22dBu line input handling and distortion under 0.0007 per cent THD (20Hz – 20kHz). The EQs are set at 80Hz for the low, 2.5kHz on the mid and 2kHz on the highs, with ±15 dB control each way. In addition to the 7mm faders there are also two aux sends, pan, PFL solo and mute on each channel. Mackie have added a useful feature which enables the muted signals to pass through the ALT 3-4 output jacks and ALT 3-4 stereo bus. The ALT 3-4 mix can then be assigned to the main output which effectively means it can act very much like a mixer within a mixer. You’ll notice that the knobs sit slightly higher above the faceplate than on conventional mixers, so if something does fall onto the mixer, the impact is transferred from the knobs to the chassis and thankfully not to the potentiometers or circuit board. The 12 part LED display is bright and accurate, the sound is great and it ships with Tracktion 3 Music Production Software for Mac or PC. Happy mixing! [Find out more at Juno] 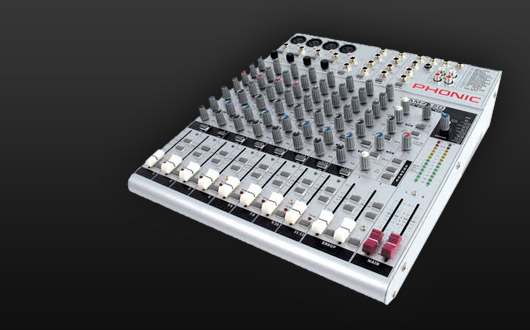 This is another feisty addition to our 5 Best series, packing an impressive arsenal of features. It’s a four mono, four stereo channel mixer that features two aux sends, two stereo aux returns and two subgroups with main left and right routing switches. You’ve got professional quality XLR main outputs on the back, XLR and 1/4“ TRS on the input channels and inserts which all sit flush, which is a surprise for a unit in this price range. We’re also graced with a sweeping mid range on the EQ – another feature usually reserved for the pros – that can be set between 800Hz and 3kHz, with the highs at 12KHZ and low EQ on 80Hz with ±15dB gain. You’ve also got a 75Hz lo-cut on the mic channels with pre-amps under the hood. The 7mm faders feel sturdy enough and although the EQ knobs are a little on the cheap side they’re actually surprisingly responsive with enough separating space to get properly stuck in. The real money shot is the 32/40-bit digital stereo multi-effect processor. At first it may feel claustrophobic because of the lack of editable parameters, but once you start flicking through the bank of 100 pre-sets you’ll see that it’s actually very functional. Each of the main effects types has up to ten impressive variations, with a dry/wet effects send on each channel so you can be as heavy-handed or gentle as you like with their application. The sound quality exceeded our expectations, with an acceptable level of background hum and no hugely apparent colouration to the sound. [Find out more at Juno] 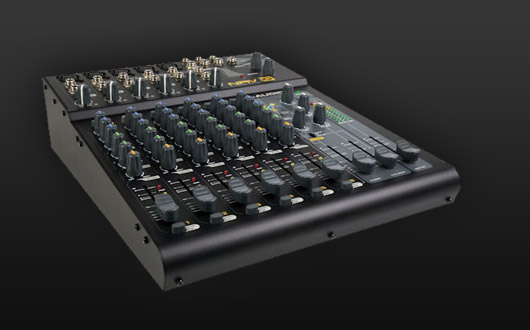 A great combo workstation that’s been around a while and comprises a 24-bit/96kHz Firewire10 in/out digital audio interface alongside the raw power of a traditional 8:2 analogue mixer. It’s also got an integrated digital effects processor (with 256 preset effects), and when connected to the computer can be used in conjunction with VST plug-ins. These plug-ins can be used in real time on the analogue channels via the included NRV10 InterFX software, much in the same way as hardware inserts (yielding low latency). Out of the box it’s a got a unique colour-coded rotary section with very pleasing faders (both in movement, grip and durability) plus analogue connections for input, aux send/returns and headphones utilising ¼” TRS jacks with five individual XLR inputs for mic, with high quality pre-amps which incorporate M Audio’s renowned Octane technology. The EQs are a fixed three band type at 12kHz, 2.5kHz and 80Hz, with the standard ±15dB gain cut/boost, pan plus a handy pre/post button for the channels that are sent to the audio interface. There are also mute buttons, which, as with the Mackie 1402-VLZ3, send the signal to an alt bus when depressed – although there’s no separate volume control for this function. The drivers are reliable, the InterFX software is intuitive and it’s compatible with Pro Tools M-Powered. Sound-wise it’d be unfair to fault it at this price range, and due to its analogue/digital presence it’s equally suited to anyone wishing to make comprehensive home recordings as well as a variety of live applications. [Find out more at Juno] 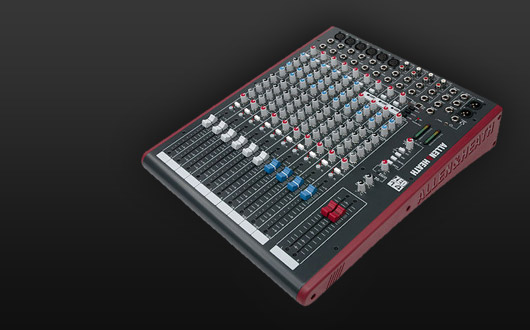 Allen & Heath have been building mixers for the last forty years and as you’d probably guess, they’ve got the hang of it. This is a fourteen channel desk with a USB 1.1 interface for basic recording. On the bench the steel face-plated mixer looks practically indestructible, and as with their DJ mixer range each of the channels is mounted on its own independent PCB. The mixer’s analogue channels are split between six mono mic/line, all of which have wide gain duo preamps and Neutrik XLR’s plus ¼” TRS jacks. They feature a decent three band EQ with 12kHz on the high shelving, that all important swept mid (which can be set between 120Hz to 4kH) and lows set at 80 Hz, plus a switchable 100Hz low cut filter. Then there are four stereo channels which only offer two band high/low EQ. All of these have channel inserts plus a pair of pre-fade sends and an additional pair of post-fade sends. The three stereo returns (Stereo, 2Tk and USB) all have level knobs and all channels have mute buttons with status LEDs, PFL buttons with LEDs/ peak-level indicators. The 10mm channel faders are the finest in our 5 Best series, with a long smooth action and rubber membrane to protect the circuit board from moisture. The monitor output section is well catered for with a ¼” jack and commercial minijack for headphones. It ships with Sonar LE and is this series’ best bang for your buck. [Find out more at Juno]