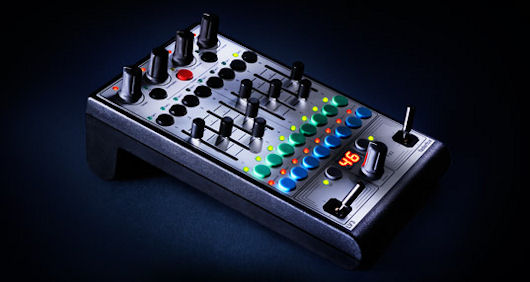 Bespoke compact controller manufacturers Faderfox this week unveiled final details for the LV3, which is set to hit the shelves in mid June.

Optimized for Ableton Live (shipping with auto-map files for Live Eight) yet compatible with other DAW software, this controller is USB bus powered with consumption less than 500m W/100m.

You can now control up to eight simultaneous tracks, with the option to shift this eight track window to other groups of tracks. Other significant additions include the advent of  a two digit LCD display which relays the current scene number and track window plus two independent joysticks for quick and accurate control over XY-fields.

The four rubberized multifunctional encoders along the top axis are now smaller, thus decreasing the size of the turning circle for quicker ‘on the fly’ manoeuvres. Other key USPs include up to 280 freely re-assignable commands (each track sends on separate MIDI channel), 24 programmable buttons and 33 coloured LED s displaying track status.

You can also control global parameters such as tempo, quantization and master/cue volumes with a dedicated knob for selecting, launching and stopping scenes and clips. The LV3 will cost £187 excluding VAT.