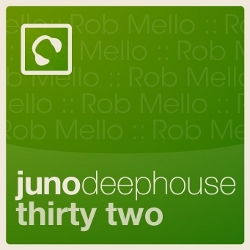 We are delighted to inform you that the latest Juno Download deep house podcast has been mixed by none other than Rob Mello.

Rob has been releasing records since time in memorial, under various guises with various people as Disco Elements, Sensory Elements, Reel House, Black Science Orchestra, Sensory Productions, and in his own right most notably with the legendary ‘Fantasize’ on Classic Recordings and ‘Give Me’ on Disco 45.

One of Rob’s early creations, Heaven and Earth (alongside Luke Solomon and Zaki D) ‘Space & Time/ Prescription Every Night’ originally released on Chez Damier’s Prescription imprint in 1995 has been re-released on Gerd Janson’s brilliant Running Back label. Rob has also recently released the excellent ‘Things Ya Doin’ single of Disco 45, is currently working on a remix of the classic ‘Sense of Danger’ by Presence for Juno and has also has a forthcoming single with with the legendary West End Records star Taana Gardener…

And if that’s not enough, Rob and old school production partner Zaki D are resurrecting one of the UK best ever house labels, Luxury Service…watch this space for more info.

As always, you can subscribe to the mix for free in iTunes here and buy the individual tracks featured here.

4. Willie Graff/Tucillio: Give You Up (Chez Damier interpretation) – Freerange