Parachute into Glade for free 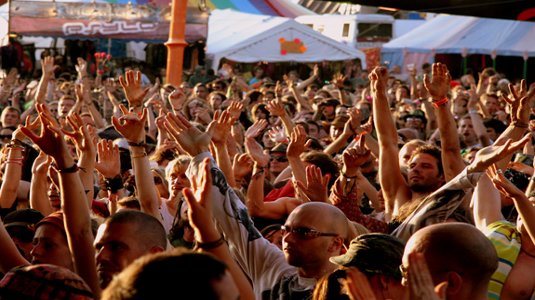 Want to get into Glade Festival this year for free? It’s pretty simple, just parachute your way in.

Glade, which takes place from the 15th – 18th July 2010 at Matterley Bowl, Winchester have confirmed that they will be allowing festival goers in for free to this year’s event via parachuting, provided they are dressed as Elvis… wearing a sound system strapped to their back… and hit the ground dancing.

Glade Festival Director Nick Ladd had agreed to a friend’s request to parachute in free of charge for charity if he agreed to some strict terms. “A mate of mine who is into sky diving asked me, ‘If me and some friends did a charity sky dive into Glade would we get in for free?’” Nick claimed. “I thought it was only fair that we threw this open to all comers and added in some stipulations. It’s worth mentioning that the 50ft high flame that comes out the top of the Arcadia Stage is probably worth avoiding!”

Featuring Orbital, Tricky, Simian Mobile Disco and Green Velvet this 2010, Glade is now entering its seventh year, evolved as a unique hybrid between a rave and a fully fledged festival. Tickets are available for £135 from the website in addition to a limited number of discounted student tickets for £110. Designated landing area for parachutists with details to be released soon.